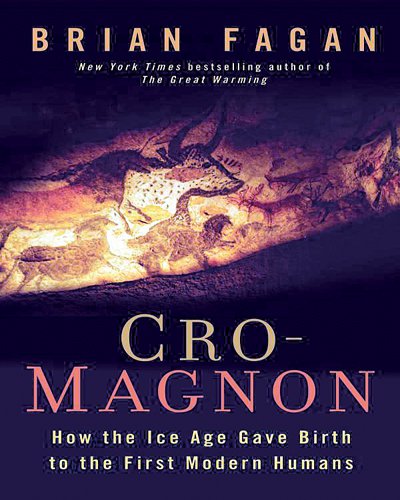 Modern man, people like us, known as Cro-Magnon, entered Europe from the Near East around 45,000 years ago.

Waiting on the scene were the Neanderthal shorter, stouter, much stronger but way less intelligent who’d had the continent to themselves for 200,000 years. A mere 15,000 years later, the last of the Neanderthals, confined to a small area around Gibraltar, died out.

Archeologist Brian Fagan addresses the question why along with how the unique attributes of Cro-Magnon man ensured his survival and eventual triumph. His book is Cro-Magnon (Bloomsbury Press. New York, 2011, 295), subtitled “How the Ice Age Gave Birth to the First Modern Humans”.

Fagan is a facile writer, author of 24 books and editor of the Oxford Companion to Archeology. Though like many academics he is a bit too fond of his own voice and prone to repetition, he is the ideal person to write about what we can never know for sure.

Along with archeological evidence, he provides entertaining snapshots of enlightened speculation. He calls the Neanderthal “the Quiet People” and sees them spying from hiding on the new intruders, much as American Indian tribes did on the first Europeans.

Among the varied interactions between the two groups, one was killing. As the Cro-Magnon thrived in numbers, the Neanderthals were marginalized into extinction.

He also provides vivid scenes from his own imagination: a trio of Cro-Magnon hunters at a riverside stealing a deer that a pair of Neanderthals have long been stalking, a Cro-Magnon clan gathered at a fall campground to massacre a reindeer herd at a ford, a family in winter quarters at a cave, preparing weapons, subsisting on stored fat and setting out trap lines for Arctic fox.

While Neanderthals relied on simple thrusting spears to bring down big game, the Cro-Magnons employed a vastly superior toolkit of spear-throwers, bow and arrows, barbed harpoons, snares for small game, nets for fish, and needle and thread to fashion trousers and parkas.

“What gave the newcomers the real edge was their intellectual awareness and imagination, their ability not only to cooperate with others, as the Neanderthal did, but also to plan ahead and to think of their surroundings of a living, vibrant world,” the author writes.

“This they defined with art and ritual, ceremony, chant and dance, which helped them ride out the punches of rapid climate change… Their imaginations, their rituals, gave them a far more important cushion against harsh environments than any technological devices.”

The author provides lavish descriptions of a great many cave paintings and sculptures. They are crammed with complex supernatural symbols the meaning of which, he admits, we will never know. But our ancestors were most of all keen observers of the exotic bestiary around them: wooly mammoths, rhinoceros, lions, aurochs, bison, wild boars, reindeer.

“The Cro-Magnon surrounded themselves with depictions of the most challenging and formidable members of the bestiary, some of whom were too dangerous to be stable prey.

It’s a mistake to think of Cro-Magnon art as being confined to caves and other places far from daylight. Every hunter carried a small arsenal of more permanent weapons that he decorated for himself, perhaps with slashed lines or geometric or curved patterns or with depictions of the animals that surrounded him on every side.”

As the years passed, populations increased and art became more ornate. People maintained a traditional cycle of hunting camps during summers and caves in wintertime.

“For all their artistic genius, we know nothing of the full pageantry of their life: the colors, the smells, the chanting, flutes, drums and dancing that was, undoubtedly a rich and essential ceremonial life,” the author notes.

In their underground dwellings they left painted evidence “of the complex spiritual beliefs that were a buffer between the living and the powerful forces of the supernatural”.

Some caves were inhabited for many thousands of years, but with the coming of agriculture and domesticated animals, the clans eventually abandoned them for permanent year-round settlements.

The caves were left in darkness for many more thousands of years before their descendants would rediscover them and wonder at what their amazing ancestors had wrought.