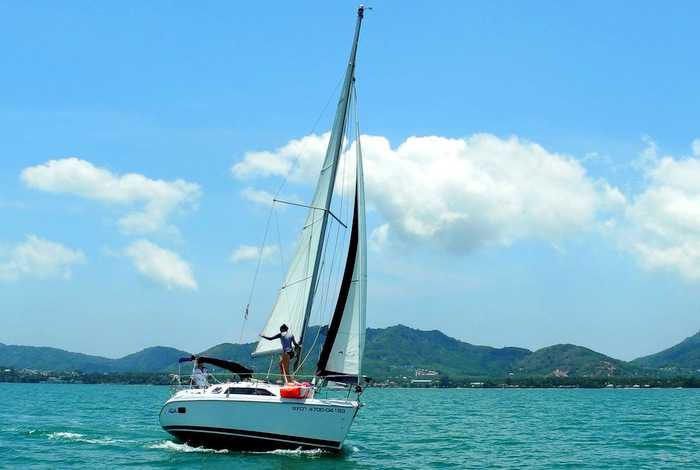 PHUKET: Often the boats and the lifestyles featured in this boating column highlight how the “other half” lives. Well, not exactly the “one percenters”, but more like the “eight to 12 percenters”. Yet what lies behind all the luxury is the same common ground: the lure of the sea.

What many people don’t know, including many long-term Phuket residents, is that a slice of that experience can be enjoyed in Phuket waters for just 200 baht – the race fee for non-members at the Ao Chalong Yacht Club (ACYC) for joining one of the races in its annual series.

“People come from around the world to enjoy sailing the Andaman and see the splendors of Phang Nga Bay. For people living in Phuket, that experience is right on their doorstep,” said life member and former Commodore, Grenville Fordham.

“What amazes me is how many people sail here on their boats, and then rarely venture out to sail in local waters. The ACYC Sunday race series has for years proved a valuable way of learning the local waters and where rocks and shallows lie, and for yachties to network and learn about what marine services are available on the island.

“It is also a great way to learn from expat sailors what the local regulations are and what is required to make sure your stay in Phuket remains legal.”

Steve Lawrence, 63, from England, has been sailing for 25 years. He finally ventured out for his very first ACYC race just weeks ago.

“I’ve known about the ACYC since I arrived here, but this was my first race,” he said. “I’m really a cruising sailor. I’ve spent eight years cruising throughout Southeast Asia – Borneo, the Philippines. Essentially, I’m a cruising yachtsman.”

Yet, Steve had never joined an ACYC race in his 10 years’ living in Phuket. The tipping point was friendship. “I’ve known Grenville a long time. I respect the contribution he’s made to sailing in the country,” said Steve.

“This was the first time I’ve been on a boat with Grenville… He made an offer I couldn’t refuse,” he laughed.

Steve’s verdict on his first foray racing in Phuket was simple: “Absolutely fantastic.”

“If you want to go racing, you want challenging conditions – you want wind, choppy conditions and poor visibility. Today we had all that,” he said.

“It was the kind of experience I wanted, and it makes me feel like I want to do more racing. It was my first race and the boat I was on came first.”

“Every cruising yachtsman should go racing,” Steve admitted. “It sharpens your skills. Everything must be done quicker, sharper. You must pay attention to everything you do.

“For a cruising sailor to turn up to a mooring or anchorage 10 minutes late is nothing – but today we won by six minutes, and in racing that is a huge margin.”

The topsy-turvy conditions last Sunday brought topsy-turvy results. Regular first-place in the monohulls Aqua came third on the day, testament that the handicap system used by the club levels the playing field for all competing crews, whether they be novices or competent racers (click here for the race report).

For years the ACYC race series has proved a valuable training ground for local sailors competing in the mid-year Phuket Raceweek regatta (click here) or the annual King’s Cup Regatta, which this year begins on November 29 (click here).

And that’s where the ACYC stalwarts shine, regularly notching up victories against professional crews.

“It is the range of weather conditions that make it perfect for race practice. Last week we had gusts of up to 15 knots and one-meter waves on the bay. The previous two races saw light winds that tested racers’ skills and patience – and pretty much resulted in a pleasant jaunt around the course,” said Bob.

In recent years the club has also made strides in developing its new clubhouse (click here) into a family-oriented venue suitable for parents and children – not just salt-spattered yachties.

On race-day Sundays, the clubhouse serves a roast that is fast gaining a reputation as a feast to be conquered and provides live music. During the past year, the club has also organized local dinghy sailing lessons for beginners.

“We encourage all people – from sailors with decades’ of experience to people who have never been on a sailboat before – to join the series. It’s simply one of the best ways to enjoy an essential part of being in Phuket,” concluded Grenville.

For more information about the ACYC, its race series and other events, visit the official website (click here).

A bounty for the Phuket balcony