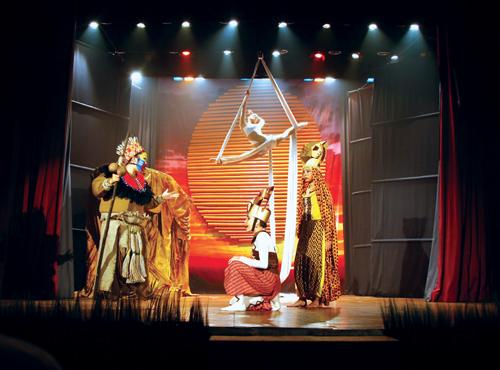 PHUKET: The cast and crew of the British International School (BIS) production of The Lion King which took place between April 1-3, probably had to catch up on some sleep, too. They earned it.

For four months the whole school has been a hive of activity in anticipation of this, their largest production, and on the first night the full glory was revealed to a packed house.

From the stunning costumes and superb acting and singing by all the principles, to the rousing choir and excellent musicians, this was a production that has set a benchmark for future shows.

Word of mouth had already meant that tickets for the three nights had completely sold out well before the opening performance.

Kudos have to be given to the Head of Arts at BIS, Neill Thacker, who together with director Moira Lowe, pulled off such an ambitious project. As producer, co-director and musical director, Mr Thacker is another who must have slept well. More plaudits must also be given to Khun Kanitsorn Ourairat who designed the incredible costumes for the huge cast.

The following morning the lions, zebras, gazelles, birds, hyenas and all the other creatures returned to being BIS students and they can be justifiably proud of their theatrical achievements.

Such is the circle of life.

For those who missed the show, a double DVD of the production will be available at the school on April 22.