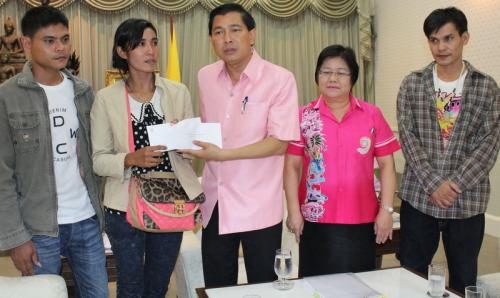 PHUKET: Apichet Chooklang, killed in a gold shop robbery Monday evening (story here), was remembered by his girlfriend as a man who greatly enjoyed helping others.

As relatives and friends waited at Vachira Phuket Hospital yesterday for doctors to finish removing the bullets from his chest and release his body for the trip home to Nakhon Sri Thammarat for his funeral, Satika Chansawat, Mr Apichet’s fiancé, spoke about the robbery and all the times her boyfriend had helped others.

Ms Satika, a 24-year-old bartender at Sea Pearl Villas Resort in Patong, told the Gazette in a shaking voice, “May he rest in peace. I will miss him always. He was a good person and I am proud of him and what he did. The only thing I regret is I did not have a chance to say goodbye to him because everything happened so fast.”

Recounting the events of the night before, she said, “Before going to the gold shop, we went to see a movie at Central Festival. After that we went home to Patong for awhile and then went down to the gold shop on the bypass road to exchange a gold necklace.

The couple had been together for years and planned to marry early next year, she explained.

“As we were choosing the necklace, I heard the shop staff shout that there was a robber in the shop, so I crouched down,” said Ms Satika.

“Apichet walked toward the robber. I tried to tell him not to go. I think he didn’t see the robber had a gun, since he hadn’t raised it yet,” she added.

“He had some knowledge of martial arts and he used to serve in the military, so he might have thought he could stop the thief. He had actually managed to stop two other robberies.

“When the robber saw him coming, he shot him twice in the chest. I saw him fall on the floor but couldn’t go to him because I was afraid of being shot,” she said.

Ms Satika recalled how her fiancé often helped other people. “Sometimes he arrived home after work with dirty clothes and I found out he had stopped on the way home to help people who had been in a car or motorcycle accident,” she explained.

“Whenever he saw news on TV about a good person helping other people, he always admired them and said that those people are to be respected. If he could help other people as they did, he would die happy,” Ms Satika said.

One of Mr Apichet’s cousins, Ekkapol Chainuruk, explained that Mr Apichet’s parents died years ago and he was an only child.

“I was very close to him. I used to work in Phuket and stayed with him at his place. I had just moved back to Nakhorn Sri Thammarat when he died,” said Mr Ekkapol.

“I hope the police will be able to arrest the robber soon,” he added.

The owner of the C.P. Gold Master & Jewelry store, who asked not to be named, told the Gazette the gold shop is not insured.

“We cannot afford the insurance. It is too high,” the owner said.

“The gold we lost was not as important as losing the life of a good man… If we are lucky we will get the gold back, but he will never return to his family,” he added.

The store owner explained that when the robber entered the store, the sole male employee had already gone to the bathroom at the back of the store.

“If he had been in the shop, he might have been the robber’s target. I believe the robber was ready to harm anyone who acted against him.

“I always tell my staff to hide if the shop is robbed. I do not want anyone to be hurt,” the owner said.

“I feel so sad for Mr Apichet. He was a good man who tried to stop the crime. We contacted the family to inform them that we are here if they need anything,” he added.