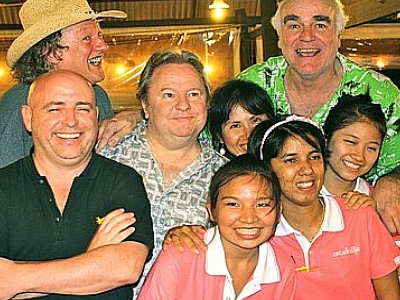 PHUKET: We’ve heard they’ve been scoffing our food, drinking our beer and eying up the women. Those dastardly comedians from the Whose Line Is It Anyway show have been seen floating around Phuket already, apparently “warming up” for their side-splitting show at the Holiday Inn tonight.

That’s right folks, The Phuket Punchline Comedy Club’s exclusive and uncensored mirth-filled menagerie of top comedy acts have opened their arms in an invitation to take part in this unique event at Patong Beach, where pretty much anything goes.

The sedentary Steve Steen, the slothful Stephen Frost, the lethargic Andy Smart and the inactive Ian Coppinger have nothing planned, but they intend to use the produce of Phuket’s fertile comedy minds to make themselves look good and generate new material for their own benefit.

Unless you have kettles to descale or an Airfix plane model to complete, this is a must attend, not to be missed event and once-in-a-lifetime experience.

Tickets can be purchased through PhuketGazette.net/tickets or visit PhuketComedy.com for a full list of outlets.

The Phuket Gazette is a charter sponsor of the Phuket Punchline Comedy Club.

Phuket lifestyle: The art of life

Phuket books: Battle of the Eco-Warriors