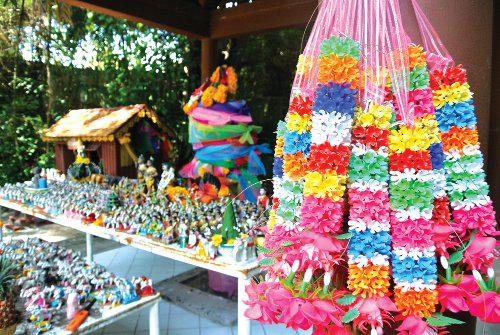 PHUKET: When building towns and cities, ancient Thais adhered to several deeply rooted practices for hundreds of years. One such belief is the construction of shrines that would house the “city pillars”.

Thais believed that the city pillars would be the resting place of spirits that would guard their city from natural disasters, diseases, enemies and any other malevolence that could befall them. City pillars are usually made out of the strongest wood available. Phuket has four city pillar shrines in different locations on the island. The first one, called “Sarn-Lak Muang Mai”, or the new city pillar shrine, was built in the year 1809, during the reign of King Rama III.

Today, this shrine is located in Baan-Muang-Mai near Thepkrasattri Road. The pillar that can be seen today however, is a new pillar installed in 1985, to commemorate the 200th anniversary of the battle of Thalang and the heroic deeds of Lady Chan and Khun Mook. This shrine faces towards the west. The second city pillar shrine in Phuket is located in the old seaside village of Baan Tha Rua.

At this shrine, visitors will find a small boat with a single oar. Legend has it that a long time ago, the spirit that resided in this city pillar once visited the dream of a local villager and asked for a boat so that she will be able to travel the nearby canals and sea as she pleases. After that, the villagers of Baan Tha Rua constructed a small boat and offered it to the guardian spirit at the shrine. The Baan Tha Rua city pillar shrine faces towards the east, out to sea. The third city pillar shrine in Phuket is located in Wat Rang Pa Sak temple, on the Cherng Talay-Baan Don Road in Thalang district.

Near the entrance to the temple, visitors will find this city pillar shrine. This particular shrine faces north and it is said that in the old days, the location of this shrine was infamous for the number of dangerous animals that lived in the nearby surroundings. The fourth city pillar shrine in Phuket is situated near the Banyan Tree Resort near Le-Pang beach in Cherng Talay. This shrine is surrounded by a beautiful garden.

The guardian spirit of this shrine is often referred to as “Chao-Mae Kesinee” and is revered by the locals. Judging from their locations and the directions they face, the four city pillar shrines in Phuket were likely constructed to protect Thalang, the main town center of Phuket Island in the old days. Although there is good motive for the construction of city pillars, there is an ancient and sinister tradition that has been practiced for hundreds of years when raising city pillars.

According to ancient Thai superstition, the construction of a city pillar requires a human being to be buried under the wooden pillar when it is erected. The ancients believed that the spirit of the sacrificed person will stay on and live inside the city pillar, guarding the ruler of the city and its people against disasters, diseases and foreign enemies. The ritual is known to have been practiced in the past.

According to historical sources, the victim who is to be sacrificed must have certain auspicious names given to them at birth. During the auspicious hour, priests will travel around the villages yelling these auspicious names out loud. Whoever responded to the names being called was seized. The date and time for erecting the city pillar was chosen carefully by astrologers.

Prior to erecting the city pillar, the “chosen ones” were treated to the finest food and pampering. At the site of the city pillar, a deep hole was dug and a large piece of fine wood was hung just above it. On the chosen day when the pillar was ready to be put in its place, crowds were invited to witness the event along with the King, prince or governor and all their high ranking officials.

As the fateful hour approached, the ruler of the city called upon the human sacrifices to guard the city in their death. They were then pushed into the hole. After that the ropes restraining the city pillar was cut, letting the heavy piece of wood fall into its final resting place and in doing so, crushing and burying alive the unfortunate victim along with it. Much of the accounts about the tradition of burying humans alive beneath city pillars have simply been passed down through the generations.

Not much has been written down and few historical evidence related to the ritual have been found. For this reason, historians cannot be sure about the extent to which these rituals were actually practiced, or if humans were really sacrificed at all.

According to local legend in Phuket, when Thao Thepkasattri (Lady Chan) passed away, the governor of Thalang decided to rebuild the town in 1809, which he named “Baan Muang Mai”, or the ‘New Town’.

According to the stories, he made preparations to erect a new city pillar. He invited 32 monks to chant prayers for seven days and seven nights, after which he commissioned one of the town administrators to go into the villages and call out the chosen names that will lead them to find a human sacrifice to be buried with the city pillar and forever be made to guard Thalang Town. From here on the line between fact and fiction becomes increasingly blurred.

According to legend, a young girl who at that time was eight months pregnant, returned the call of her name and was immediately seized. She was later buried alive with the city pillar in Baan Muang Mai. Perhaps the only way to separate legend from historical fact may be to excavate the site where the city pillars sit, but for some who truly believe in the story, that would only disturb the benevolent spirits that have been guarding Thalang Town for generations since.

Ma Song on their way for Phuket’s Vegetarian Festival