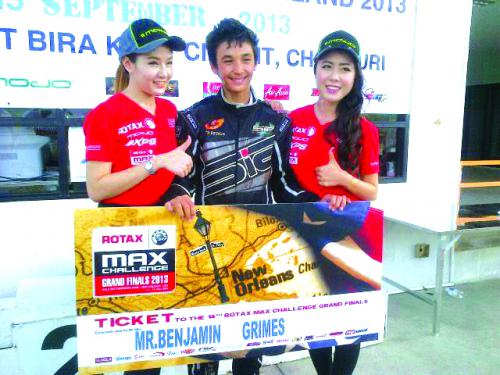 PHUKET: After returning from their holiday back in the UK, the Grimes boys (Ben and Sam Grimes) got back into action at the penultimate round of the 2013 Asia Max Challenge at the Sepang International Kart Circuit in Malaysia.

The junior category boasted a fierce field of 35 drivers and Sam started the weekend well by out-qualifying his elder brother Ben in 19th place.

Ben’s weekend started disastrously however, as he suffered his worst qualifying all year by only posting the 25th quickest lap. Massively disappointed by his performance, Ben was on a mission and started heat one superbly, getting to 12th place after the opening five laps and was fighting for 9th place but a massive shunt at almost top-speed (120kph) between the five drivers put them all out of the race instantly. Sam however, went on to finish the heat in 10th, his best finish in AMC up to now.

A more cautious approach was adopted by the 15-year-old for the second heat and went on to finish 16th place. Sam suffered a bad second heat and limped to the checkered flag in 29th after a first corner collision but persevered until the end of the race with a bent axle. Both started the pre-final outside of the top 20, and 3 laps into the race the rain came down with a vengeance which resulted in a red-flag so all karts could be fitted with rain tyres.

Ben and Sam started in their original positions and the first corner was absolute mayhem, with the pair having to take to the grass to avoid spinning karts, Ben dropped to last and made his way up the order but spun whilst making a move on another driver, dropping him back down to last and he could only recover back to 22nd, although he set the 8th fastest lap of the race; Sam finished right behind his brother in 23rd place. Starting the finals in 22nd and 23rd places, Ben was off to a flier and was up to 13th by lap one and climbing, but his hopes of recovering were dashed when he lunged two karts into one corner; the move seemingly sticking until he found the rear right tyre of another kart ahead, the pair collided and Ben’s race was ended on the spot.

Sam had an unfortunate race, he was moving up the order but was hit from behind by another driver which dropped him down and ultimately ended up finishing 24th after receiving a 10 second penalty for overtaking under yellow-flags, the penalty typifying a disappointing weekend for the pair.

A few weeks afterwards, the Grimes brothers headed back to Pattaya for the penultimate round of the Thailand Rotax Max Challenge with Ben sitting at the top of the championship standings with a tally of 328 points, with his nearest competitor a further 2 points behind, with Sam sitting in 7th place.

The goal was simple: to just finish – as the 2nd placed competitor was under-aged, and Sam voluntarily played a supporting role to help Ben secure his seat to the Rotax Grand Finals (which is given to the provisional leader of the standings prior to the final round of the championship).

The results in the heats led to a Grimes lock out of row 2 for the final, with Ben starting 3rd and Sam starting 4th. Ben got a good start and was up to 2nd and in hot pursuit of the leader for half of the first lap before the leader slowed down right in front of Ben (due to the leader’s fuel pipe dislodging) as a result Ben slowed and fell to 3rd, before his engine’s performance dropped off, Ben dropped to 5th, with Sam very close behind; and it stayed like that until the checkered flag.

Sam clearly was going quicker; but voluntarily held station – ultimately helping Ben to secure his seat in the 2013 Rotax Grand Finals which takes place this year in New Orleans, on November 13-16. Ben will be the only driver representing Thailand in his class, along with another driver in the senior category.