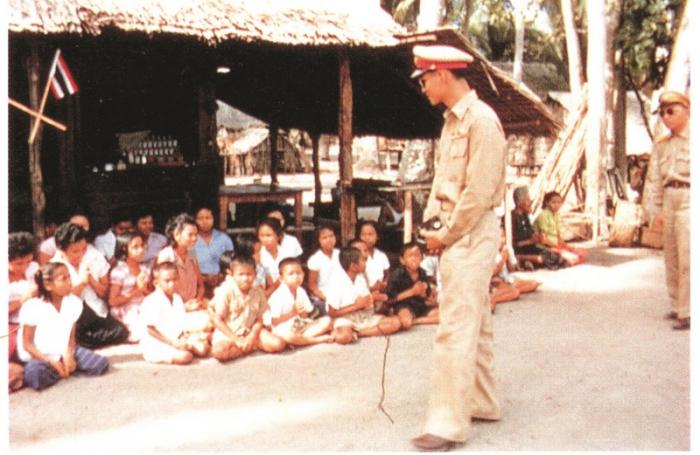 PHUKET: Last month, on October 13, 2016, His Majesty King Bhumibol Adulyadej passed away. As the royal procession brought his body from Siriraj Hospital to the Dusit Maha Prasat Throne Hall in the Grand Palace, a surreal gloom blanketed the city of Bangkok as hundreds of thousands of people lined the streets to pay their respects. The most vibrant city in Southeast Asia came to a halt. It seemed like the very heart of Thailand had stopped beating.

Thailand’s beloved monarch had reigned for an unprecedented 70 years. Not many Thais remember what it was like when he was not King. King Bhumibol came to the throne in June of 1946, after his elder brother, King Ananda Mahidol, suddenly died from a gunshot wound. Just hours after the tragic incident took place, Prince Bhumibol was declared King. He was only 18 years old.

The King’s mother insisted, however, that her son must go back to Switzerland to finish his higher education before he could return to assume his official duties.

“Throughout the entire journey, the streets were lined with thousands of people who were there to see their King,” His Majesty would later recall.

His Majesty took this promise to heart from the very first day that he ascended the throne. Since then, he worked tirelessly for the benefit of his people. He visited Thailand’s poorest communities in the most remote parts of the country. Throughout his reign he has initiated thousands of royal projects aimed at bettering the lives of the poorest Thais.

Lieutenant Dilok Siriwalop was one of the people who followed the King on several of his trips to the provinces. He fondly remembers his experiences serving the people alongside the King.

On one occasion, His Majesty was due to visit Phukhao Thong sub district in Narathiwat Province. Unfortunately the bridge that the royal motorcade was supposed to cross on the way to Phukhao Thong had been washed away due to heavy rainfall and flooding.

“The King’s guards told him that it was no longer possible to cross the river to Phukhao Thong,” Lt Dilok remembered, “and recommended that he return to his palace.”

“But His Majesty asked his aide to radio back and ask whether people were waiting for him. That was about 10am. Officials at Phukhao Thong radioed back and said the people had been waiting to see their King. Most of them had arrived at dawn,” Lt Dilok said.

“Then we must go,” was His Majesty’s reply. His Majesty even said anyone who was afraid could go back, but he would make the journey.

“The King’s vehicle was half submerged in water as the motorcade made its way through. But we made it to the other side,” Lt Dilok recalled.

He is just one among thousands of people who could tell later generations about their late King and how devoted he was to his people. For King Bhumibol, his people came first and he would do anything he could to alleviate their poverty and suffering.

Throughout his reign, His Majesty visited some of the most remote and rural places in Thailand. Some of these places were so difficult to access that even government officials were reluctant to go for fear of danger. And when a senior government official is scheduled to visit one of these remote sites, the visit would surely be cancelled if it rains or the weather turns foul. But for His Majesty there was no such concept.

Sawat Wattanayakorn, Director General of Irrigation and a member of the King’s Privy Council, recalled that more often than not, he travelled with little regard for the weather and his convoy was often ordered to travel down roads and trails that were not on the official itinerary. If the King’s security team told him that it was not possible to travel for fear of his personal safety, the King would simply reply, “I can go”.

“Many times HRH Princess Sirindhorn followed His Majesty. Often she would have to pull the leeches off his feet. The hardship did not bother the King,” Mr Sawat recalled.

“One night, I was given the honor of dining with His Majesty at his table, after a long day of trekking and visiting the people in their villages in the Northeast. What he said still rings in my ears till this day. ‘The reason they are poor and have to live in these inhospitable places, is not that they want to, but because they have no other choice. I want to help them today so that in future they will be able to help themselves.”

On Deck: His Majesty was an inspiration to sailors