A leading marine biologist has proposed to the government to limit visitors to marine national parks to 6 million a year to lessen impact on its ecological environment.

Thon Thamrongnawasawat, deputy dean at the Fisheries Faculty of Kasetsart University, made his proposal at the meeting of the Marine and Coastal Resources Policy Management Committee chaired by Deputy Prime Minister Gen Prawit Wongsuwon on Friday (January 19).

The marine biologist based his proposal on information from tourism agencies and the Department of National Parks, Wildlife and Plants Conservation which indicated that this year Thailand will expect over 6 million visitors to its marine national parks.
He stressed the need to limit the number of visitors to marine national parks to a maximum of 6 million tourists to prevent environmental pollution to the fragile marine ecological system.
According to the department, the country’s 154 national parks received 4.51 million foreign visitors in 2016, and 5.87 million in 2017, a 30% increase.

Dr Thon said of the 5.87 million foreign visitors in 2017, 4.85 million were visitors to marine national parks.

With the projected growing number of foreign visitors this year, over 6 million visitors could be expected at marine national parks, he said. 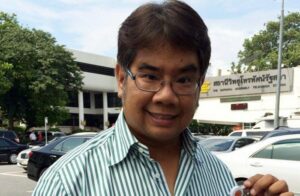 “Although this could be considered a success in tourism promotion, but in term of natural environment, it is a grave threat, particularly the marine parks which are the most popular destinations of tourists,” he wrote on his Facebook page.”

With a large number of tourists, it is unavoidable to prevent them from breaking coal reefs and picking them homes as the park has only 30 officials to take care of it.”

In addition, oil leaks from tourist boats, garbage, and polluted water will all have impact on ecological environment”, he said.

He also said a campaign by the government to boost secondary tourist spots in each area was not achieved much as foreign tourists still preferred popular tourist destinations.

Mr Thon also proposed the GPS tracking system for all tourist boats along with the closure of some marine parks to rehabilitate coral reefs and the ecosystem.

Currently, around 77% of the coral reefs in Thai waters are damaged and he hoped that these measures could lessen damaged area to less 50% in five years.

The park opens to visitors  for six months from November to April and closes for a six months for nature rehabilitation.

It is the popular tourist destination for diving and was ranked one of the Top 10 dive destinations to visit in the World.

Visitors to the marine park need to buy package tour from tour operators, mostly  one-day trip due to the park restrictions.
According to the information from the Mu Ko Similan marine national park, 4,000-5,000 tourists visited the park–90% of them are Chinese tourists.

Not all cryptocurrencies are the same