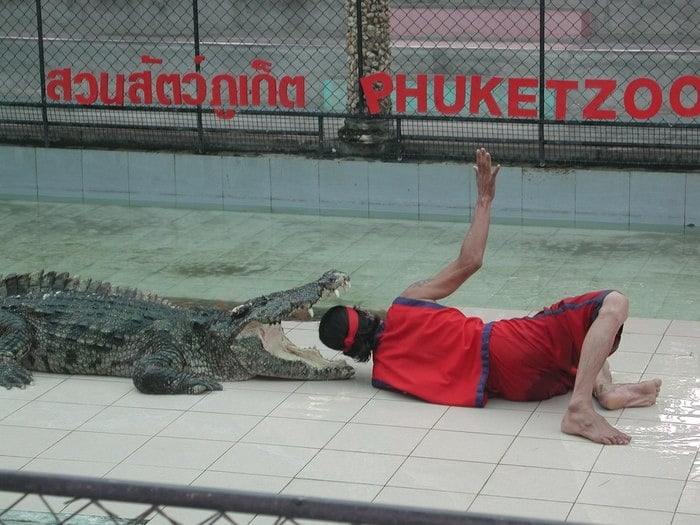 PHUKET: Continuing my analysis of the value of zoos to man and beast, another important argument in favor of zoos is that they support the principle of conservation.

Take an extreme example. There are about 2,300 tigers left in the whole of the Indian jungle, but in the state of Texas alone, there are some 2,000 tigers, all in zoos or wild life parks. As a simple matter of fact, I spotted at least five in Phuket Zoo, whereas the last free-range tiger on the island was killed some forty odd years ago.

Some species, on the verge of extinction, or extirpation, have been saved by conservation programs initiated by zoos. Classic examples include Chinese pandas and the orangutan, but other less heralded species have benefited from these initiatives.

Minnesota Zoo has a program called ‘Adopt a Park’, aimed at helping save the Javan rhino. However, it is estimated that only three per cent of global zoo resources are actually spent on conservation, and a significantly lower proportion on the far more crucial issue of habitat conservation. It is of little use ‘saving’ threatened species, if there is nowhere in the wild to return them to.

Moreover, animals bred in captivity create their own problems. One is in-breeding, a genetic weakness caused by limited populations, while another and more serious concern centers on their inability to survive in the wild. Most released creatures will die within weeks – from predation or hunger. There is also some limited evidence that ‘surplus’ zoo animals are sold to circuses – with their unenviable reputation for animal cruelty – and to unscrupulous businessmen who allow them to be shot for so-called sport. Big game hunting is obviously not dead.

Are most people aware of these issues?

The answer sadly is a resounding ‘No’. Zoos, however, can, and indubitably do, help in the business of research and education. Actually seeing animals in the flesh is truly awe-inspiring, as no amount of film footage can match the appearance – close up – of an Asian elephant or a Siamese tiger.

But there are downsides, some of which are in evidence at Phuket Zoo. Good signage with information that both young and old can read and absorb in order to discover more about the animals is essential.

In the bad old days, the signage used to be very poor, faded by sunlight and often unreadable. Now, it is better, but there is too little in the way of facts and figures.

Thailand’s education system has failed conservation badly. What do children know about Thailand’s unique pangolins or dugongs? Very little, if anything, about the Kingdom’s precious natural heritage is taught in schools, so there is a crying need for zoos to help bridge what is a yawning chasm of indifference and ignorance.

There is, moreover, still a preoccupation with the ‘tame’ animal show. Phuket Zoo advertises three different shows: four daily monkey shows, three elephant and three crocodile performances.
I dislike the entire notion of performing animals and especially the ‘training’ which precedes them, but I do concede that they are enjoyed by children.

However, no zoo can hope to match genuine encounters in the wild – watching a pod of orcas cavorting in the Pacific Ocean, or enjoying the majestic sight of giraffes, elephants, zebras, lions and gazelles roaming freely in Kruger National Park. Those are unforgettable moments, epiphanies in one’s life.

At least the guardians of Phuket Zoo, in creating an environment with fewer animals, more emphasis on native species and more ‘natural’ conditions, are moving in the right direction.

“Going to the zoo?” Why not…. you will learn plenty.

If you have gardening or environmental concerns, contact Dr Patrick Campbell at
drpaccampbell@gmail.com. Many of his creative and academic publications can be found at his website: Green galoshes WordPress.

On Your Mind: Look at China when weighing booze ban