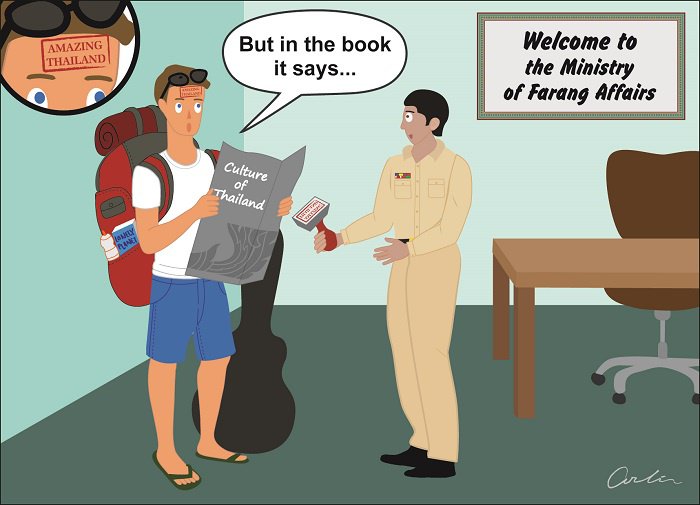 PHUKET: It is a pleasure to see that the ‘Ministry of Farang Affairs’ resonates with our readers, with each weekly installment serving up a new, and wry, view on the expat experience here in Thailand.

Drawn up by well-known satirist Stephff at Gazette partner publication The Nation, these cartoons mark a considerable departure from his usual political work. They instead focus on the challenges faced by foreigners living in the ‘Land of [oft-endangered] Smiles’. Nonetheless, they impart the same characteristic wit.

The cultural chasm between Thailand and the West has long been a source of surprise, wonder, amusement, frustration, confusion – and more – for foreigners. Given this fact, it is not surprising that a number of popular books, like ‘CultureShock! Thailand’, have been written, each in an attempt to alert the uninitiated on what to expect after they arrive here.

All expats eventually learn the hard way, as no book or travel guide can ever adequately prepare a newcomer for what’s in store in Thailand. Thus, we think the time is ripe to move the message into the realm of cartoons.

Perhaps the best tidbit of advice for newcomers is this: always expect the unexpected and you’ll never be disappointed. After all, none other than the country’s official tourism promotion body, the Tourism Authority of Thailand (TAT) itself, introduced ‘Amazing Thailand’ as its annual slogan back 1998.

The safe, one-size-fits-all catchphrase has proven so successful that it has stuck ever since, albeit with minor variations. For example, at the start of 2011, which came to be known as ‘The Year of The Great Bangkok Flood’, the TAT reworked the slogan to reinforce, somewhat awkwardly, the amazement aspect: ‘Amazing Thailand Always Amazes You’. That version did not fly well and died a natural death, but the underlying theme continues.

Stephff, who is the Minister or Farang Affairs, is of course aware that amazement is not only relative, but also cuts both ways. Thais are no doubt just as baffled by the behavior of lots of local expats as well as the hordes of invading foreign tourists. Why, Thais must wonder, do tourists continue to come in ever-increasing numbers regardless of what the latest disaster, or threat thereof, might be?

The current year is an excellent case in point. Despite Thailand being in a period of extended military rule and having suffered the worst terrorist attack ever on its soil, one in which foreigners appear to have been specifically targeted, arrival figures for ‘alien’ visitors are reported month after month as rising at Phuket International airport.

TheTourism Council of Thailand expects the August bombing in Bangkok to have little impact on the upcoming season, and they predict that foreign arrival numbers will break the 30 million mark this year, setting a new record. What could be more amazing than that?

With all this in mind, the Gazette welcomes the arrival of the Ministry of Farang Affairs and, in the interests of wider mutual perceptions and understandings, encourages our readers, Thai and foreign alike, to visit the institution on a regular basis. We’re open seven days a week – here.

This article appears in the October 3-9 issue of the hard-copy Phuket Gazette, currently on sale at newsstands throughout the island.