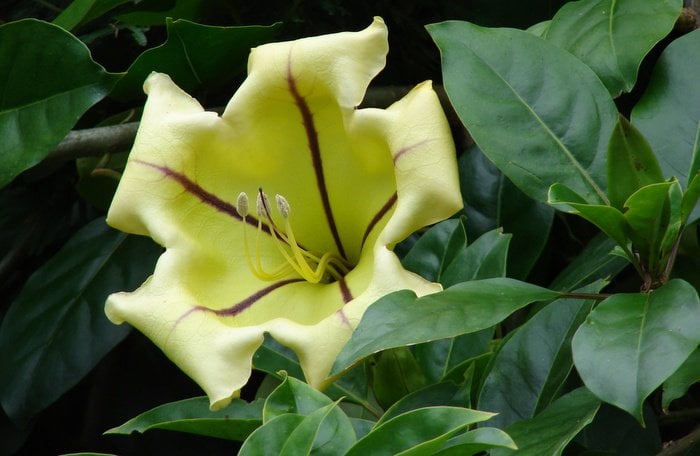 PHUKET: One of my all-time favorites is the datura, now fashionably known as the brugmansia. Its common moniker is angel’s trumpet, but in Thailand it’s known as lam pong.

Although very tempting to do so, it is not going on the ‘top twenty’ list for one simple reason – it does not relish the climate in Phuket.

On the slopes of Doi Inthanon near Chang Mai, the angel’s trumpet grows everywhere. And in Andalucia, I saw several four-meter specimens with both yellow and pale pink blooms.

Why? Both habitats have rarefied, mountain air.

Brugmansias do not like excess humidity, and in any case, Phuket is a little too hot for them. This is a great pity, for the exotic, pendulous trumpets are truly spectacular.

One cultivar, plena, has wider flowers that may exceed a foot in length.

Maybe its best place in Phuket is in a pot. It is certainly grown in containers, both on patios as an accent plant, and in Western living rooms where it always attracts attention.

Two provisos though: it is highly poisonous and needs to be handled with care since its branches are remarkably brittle.

So what is the closest alternative? This surely is solandra grandiflora, a member of the same family and also from the Americas. It is known to Thais as tuay thong.

Incidentally, this genus also includes the deadly nightshade we were taught to avoid as children.

Solandra, also known familiarly as the chalice vine or cup of gold, is a better garden choice than brugmansia, both because it is less fastidious and because it is usually a more prolific bloomer.

But be warned: it is also a vine, and for this reason will definitely require some support if you want it to climb rapidly. It is therefore best against a wall or arch where its aerial rootlets will attach themselves to anything in the vicinity.

As a consequence, it will spread rapidly along a wall, extending over 20 or 30 feet.

Yours truly made the mistake of planting one in an open bed next to the swimming pool.

It blooms beautifully, but is too heavy and cumbersome for its situation. However, the flowers are magnificent. The Latin epithet grandiflora is well deserved.

Like those of the brugmansia, the blooms are trumpet-shaped, but they are heavier, more fleshy and, if anything, more dramatic than those of the angel’s trumpet.

Usually a deep cream, the chalice-like blooms have fluted edges and are scored inside with dark lines.

Everything about this shrub is exotic, even carnal – from the massive, vase-like, sealed buds to the large, glossy evergreen leaves.

To counterbalance this fleshiness, the flowers exude a delicate, lemony fragrance.

Once established, the chalice vine is easy to cultivate. It can be propagated from heeled cuttings and has the merit of blooming several times a year. It will tolerate severe pruning, and will flower on new growth.

Its only problem is that it is a heavyweight and will need support. Apart from that, it has few drawbacks.

If you happen to see one around, it will indubitably be blowing its own trumpet.

Dr Patrick Campbell has written more than 300 gardening columns for the Gazette. In the newspaper’s revised format, he will still contribute one monthly article on gardening and another on environmental issues.

If you have questions, or a garden that you would like featured, email Patrick at drpaccampbell@gmail.com. Many of Patrick’s past articles and his academic and creative publications can be accessed at patrickaccampbell.wordpress.com.