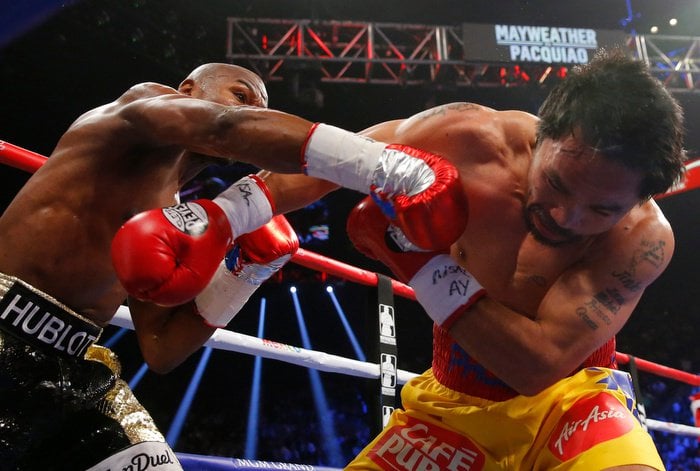 PHUKET: I’m not quite sure what compelled me to join the flock of media-crazed sports fans and buckle up for the fight of the century between Floyd Mayweather and Manny Pacquiao. The fact it was a Sunday made the decision to couch surf a little bit easier.

But in the end, I, like so many others who once went past the high-energy play up to the big event, was lulled into such a state of sheer boredom that I had to wonder if my wife had spiked my coffee with some sort of sedative.

I love Manny and my heart was with him the entire time, but at the end he was beaten by the better man on that day, who benefited from a height advantage and longer reach.

Those crying about unfair scoring are muttering nonsense. Anyone who has ever watched boxing can understand the rudimentary rules that bind the sport on points. Floyd played the rules to his advantage and won, clear and simple.

For those who claim that the judging was slanted or any element of unfairness was involved, please go back and join your nursery school children in their sandbox. You may come out if and when you grow up.

Not long ago, one of my daughters was participating in a sports event and at the end of the day she ended up short of the awards and ribbons. Her despair was evident as she questioned why everyone can’t win and why bother playing a game if you don’t win?

Over the past day or so I have scanned social media about postings about the Manny/Floyd debacle and what is clear is that a great deal of people have lost the entire concept of sportsmanship, or
shall we say ‘sportspersonship’.

There is no admitting that the match determined a winner and loser in the ring and that closure needs to be in a finite ending of the matter.

Despite bruised national pride, the Filipino people can be proud of Manny, who in his own words, accepted his defeat with grace and simplicity. As for the Floyd bashers, and there are many, the rant goes on, and on. But despite all this media hoo-ha, the reality has to be that the great scorer has weighed in and what is done is done.

Sure there remains an argument for children everywhere about the importance of winning games, titles and contests. Now that I’ve grown up, the mere utterance of that term makes my hair stand up. What little hair that’s left.

But back to the time I played for the love of the sport and also the motivation of trying to win. They often say about sports, ‘why keep score’, but the reality is that’s the measurement of not only a game but it also provides a benchmark for us to stretch beyond our limits.

I can only council my young ones about the virtues of being a good sport, in winning and in losing, and in defeat, to create value to push hard, to work harder, train harder and believe that you can do better.

Without stretch there really is no need to get off the couch and do anything at all.

At the end of the day, what’s been lost in all this is that boxing is a game and a sport.

While life has no suddenly taken center stage, this was only 12 rounds which pale in comparison to a lifetime. In a world gone mad with violence, human suffering and true craziness, the end result of what happened in the ring is hardly going to result in social and political change. Nor should it.

Most of us love sports as a pastime and a way to escape the more sober part of life, and the only message perhaps is to let the winners be and the results stand as a reminder to push a little harder, play again and see what may happen on that day.

There is no guarantee and winning a single game has little to do with how you live your entire life.