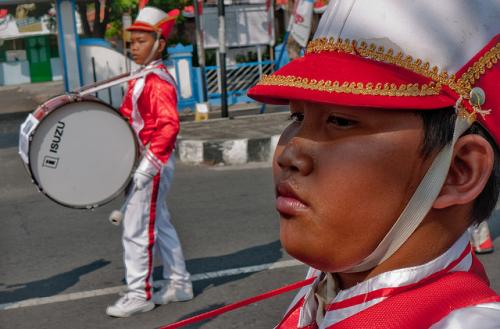 Today, 68 years officially free, Indonesia Independence Day celebrations aren’t just about draping everything in the national colors (red and white) and military parades. There’s actually a lot of fun involved, including some traditional games such as Bakiak – a speed walking race in which contestants wear special wooden sandals – 3-5 people per pair! Also, there’s Makan kerupuk – a traditional chip cracker eating contest, and there are many more activities.

With hundreds of thousands of Indonesians visiting Thailand every year (448,748 in 2012 to be precise) there shouldn’t be a lack of celebrations here too. The Indonesian Embassy in Bangkok will hold a party on August 21.

Closer to Phuket, the Indonesian Consulate in Songkhla will see some celebrations on August 24 where approximately 500 guests representing the government, military, educational institutions, business and local communities, are expected to join.

Traditional dance performance by artists from Bandung in West Java will be followed by a treat of Indonesian food such as satay, bakso (Indonesian meatballs), risoles (a king of spring-roles), Indonesian cakes and many more.

On August 17, a ceremony of Peringatan Detik-Detik Proklamasi – is held all around Indonesia and in all its foreign missions, to commemorate the proclamation of independence. No official celebrations are to happen in Phuket but with all the Indonesian tourists visiting the Island and all the Indonesian seafarers who dock at Phuket’s ports, it should be easy enough to hear somebody shouting”Dirgahayu RI !” – Long Live Indonesia!

Indonesia remains the world’s fourth most populous country, with an estimated 237.6 million persons, or just over 3 per cent of the world.