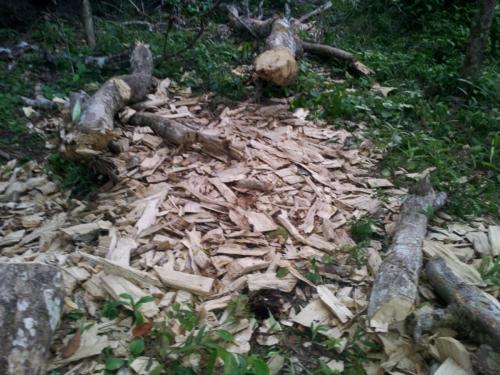 PHUKET: A raid into the protected area of Bang Khanoon forest reserve uncovered the results of illegal logging in over 100rai of Phuket forest.

“We found about fifty large Eaglewood trees cut down and a lot of pieces of the wood on the ground,” Thalang Police Deputy Superintendent Amnuay Kraiwutthianun told the Phuket Gazette.

“We believe the illegal lumberjacks cut down trees in an area ranging from 100rai to 200rai,” Lt Col Amnuay said.

The investigation was halted yesterday evening when it became too dark to continue. However, Forestry officials were able to confirm that the area the trees were harvested from was well within the protected forest area.

“Some of the tress were recently cut down; the cuts were still fresh and sappy,” Col Amnuay said.

No lumbermen were found at the site, and the only Forestry staffer working at Bang Khanoon forest reserve at the time was unable to provide any useful information, Col Amnuay said.

The Forestry Department has ordered more officers be stationed in the area for the next couple of days.

“We seized the wood as evidence and will continue the investigation,” Col Amnuay said.