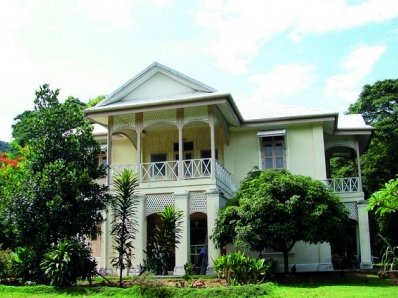 PHUKET: Dilapidation fears may cause Bangkok Airways to lose its rights to use a classic building in Phuket Town as its office.

The two-storey building, located on six rai in the green enclave of the provincial offices on Damrong Road, has stood empty for seven years.

Government Officers, led by Phuket Vice Governor Somkiet Sangkaosut-thirak, inspected the building on May 4, along with Thamrong Thongtan, chief of the Phuket Treasury Office, which owns the building.

Mr Thamrong explained that Bangkok Airways signed a 30-year lease on the building in 2004. Under the conditions of the lease, the airline was to restore the building to its former glory.

Although the airline has fulfilled its rental payments of nearly one million baht a year, Bangkok Airways has failed to renovate the building and has not occupied the premises or used them as an office, as was originally intended, said Mr Thamrong.

Now his office is considering reclaiming the property in order to preserve the building, he said.

“As I see it, Bangkok Airways did not uphold the contract. We have to fairly consider whether or not to continue or cancel the contract,” said Vice Gov Somkiet.

“If they [Bangkok Airways] want to continue to lease the building, we will consider whether or not to levy a fine. If they want to cancel the contract, we will turn this property over for other use,” he added.

Bangkok Airways Business Development Manager Watchara Umnuayraksakul told the Gazette that continual economic upheaval since 2004 was the main reason the airline had been unable to move into the property as planned.

“Since 2004 we have faced one economic crisis after another, from the aftermath of the tsunami, to the [yellow shirts] forcing the airport to close in Bangkok, to the red-shirt protests last year. All this means we have been unable to follow through with the contract as planned,” Mr Watchara said.

“But now our financial situation is getting better and we are looking into continuing the project, although we will have to first discuss with provincial officials about revising the contract before moving ahead,” he added.

Mr Watchara said that if Bangkok Airways does go ahead with renovating and occupying the building, the project will include the construction of a two-storey building at the site as accommodation for employees.