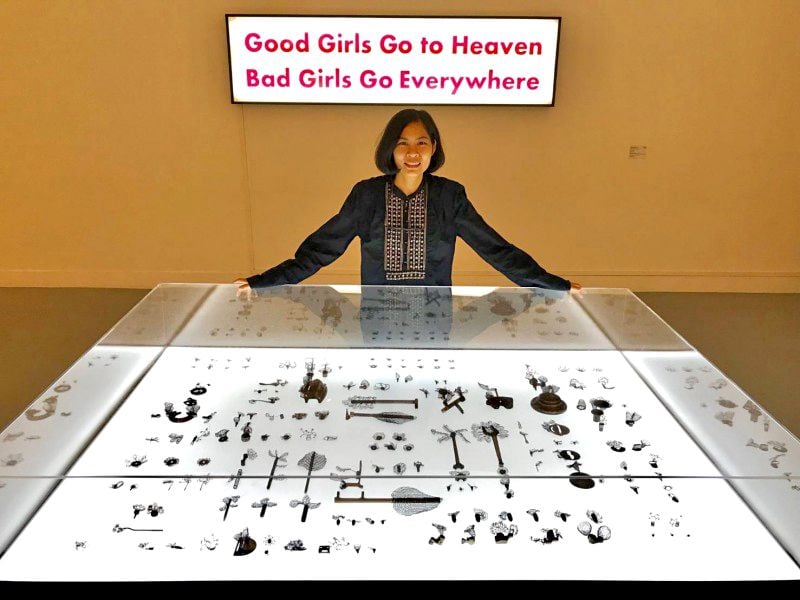 Thai artist, Imahathai Suwatthanasilp new work at the Bangkok Biennale has brought attention to the prostitution industry in Thailand. Through her work the artist critiques preconceptions on sex workers while highlight their prevalence.

Imahathai’s new work involved hair, specifically hair collected from a number of sex workers in Thailand. Her passion for hair started when her father was diagnosed with liver cancer in 2003 and he asked her to cut his hair. He had always grown his hair into four long ponytails, each of which represented one of his children. He had hoped that it could be a part of him his children could keep with him if ever he would have to leave them, he died in 2008.

Studying art at Silapakorn University she began to use her own hair as a medium for deeply personal artworks. Her new installation titled Good Girls Go to Heaven, Bad Girls Go Everywhere is currently on display at the Biennale (taking place until February 3 in 20 venues across Bangkok) involves weaving the hair of Thai sex workers around 174 parts of a vintage sewing machine.

With a population of 70 million, it is estimated that there are around 800,000 to 2 million sex workers in Thailand. Often perceived to be generally accepted, prostitution remains illegal in Thailand.

Under a 1996 Thai law, there is no offence for the customer but the sex worker can be fined for offering his or her services and on top of that receive up to a month in jail for working at a sex establishment.

Recent government discussion are moving to the notion of abolishing or regulating the business creating protective measure for the work force rather than current punitive ones. Sex workers have shared their opinion and agree that the trade should be legalised and the government should create worker ID’s so they can be identified and protected like other occupations.

For her current art work Suwatthanasilp reached out to the Empower Foundation in Chiang Mai. They provide support for those who work in the sex industry, fight for the decriminalisation and offer protection to the workers while helping them to learn new skills.

The sewing machines were part of one initiative to help provide an alternative source of income for the sex workers. People were kind enough to donate sewing machines but the organization notes they always came with a label of expected ‘salvation’.

Prostitution is deemed as a bad career choice, and all sex workers are under pressure to work in a ‘acceptable’ job. Suwatthanasilp’s works has the hair of the workers shaped into leaves, grass and flowers around the sewing machine parts portraying the birth of something beautiful, delicate and intricate being able to born out of cold metal. 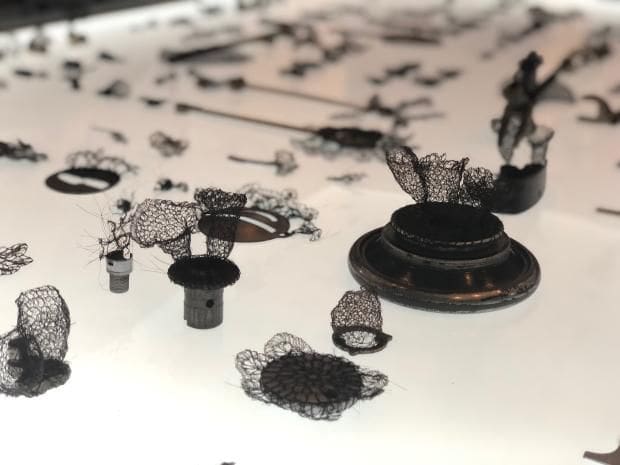 “By changing the shape of the lifeless sewing machine parts into new and lifelike objects… I want to tell people that life is able to grow out of something cold, just like how sex workers survive the judgement of the society and social structure,” – Suwatthanasilp

Very few of the machines were used for their expected purpose, as many of the women had chosen to work in this dark industry as a means to provide for their family. One woman know by the artist said that she worked her whole life in the sex trade as it was the only way to put her kids through university.

Regardless of the negative connotations attached to their job description, many of these women love their families and will do the necessary to provide for them.

In some countries with legal prostitution social benefits have shown that incidents of rape have decrease due to the availability of the service, as well as lower the spreading rate of various sexually transmitted diseases. Keeping prostitution illegal is often pitched as a act for women, yes it only detrimental to an huge pre-existing industry.

Decriminalisation can provide measures of precaution for the worksas well as access to legal protections although many advocated will say that only once prostitution has been completely erased will women be ‘saved’ form the exploitation and violence associated with it.

From an outsiders point of view, the conundrum stems by the juxtaposition of allowing the industry to flourish and exist in Thailand while not being willing to provide any form of legal safety net for the workers. Whether regulations and and a new approach by authorities would help remains to be seen, but it could be a first small step in the right direction.

Authorities struggle to find solutions for the BKK smog

The Chao Phraya lights up for new years eve