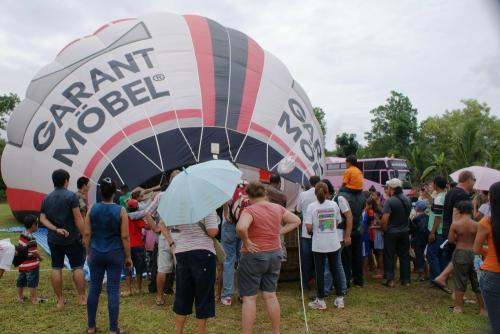 PHUKET: The Airshow and Family Picnic held at Phuket’s Air Park over the weekend was a roaring success, with organizers estimating that nearly 7,000 people had attended by the time the two-day event closed last night.

Navy League Phuket President Pat James, one of the key organizers, said the event was the largest of its kind ever staged in Southern Thailand and a fantastic family oriented experience for the Phuket community (click here for details).

“It was a phenomenal success. The whole idea was to educate, entertain and raise funds for community services and I think we were very successful in all those areas.

“When you consider this was run entirely by volunteers and a committee, it’s absolutely phenomenal; my hat is off to all the volunteers and all the support crew and to everyone who was involved,” he said.

For many people, the opportunity for a joy ride in the sky proved irresistible, and more than 130 of them took to the air in one of the many airplanes and helicopters avialable at the event.

Daredevil pilot Les Vorosmarthy thrilled the crowd with a dazzling display of aerial maneuvers in his sleek red Extra 300 aircraft. Experienced sky diver Corey Parker also wowed the crowd with several jumps from a helicopter over the Air Park. American style Bratwurst, hamburgers, chili dogs and a host of other American food favorites were consumed in vast proportions, along with plenty of American (and Mexican) beer. Many stall holders worked overtime to feed the crowds queued up at their tented counters.

The Great Burnin’ Bum Chili Cook-off was hotly contested, with judges sampling a delicious range of chilies lovingly prepared by local chefs and other hot food freaks. After careful deliberation, Joy’s Cafe in Patong was crowned Chili Champion of the event.

The Radio Controlled Aircraft Club of Phuket were also a crowd favorite, with throngs of spectators lining up to watch the miniature planes in action.

Coinciding with the event, the Phuket Hash House Harriers (HHH) held their weekly run at the Airpark, starting at 4pm and finishing about an hour later on the far side side of the runway, out of harm’s way.

About 100 runners, walkers and other participants turned out for the muddy event, which well-known, long-term Phuket expat and HHH member, Harry Usher called: “Wet, but very entertaining”.

As evening fell on Saturday, a spectacular fireworks display was staged, before local Phuket band Black & Blue kicked off their set of classic blues and soul tunes to entertain the crowd.

Pat James said that the success of the event bode well for the future and that he hoped a similar and even bigger event would be organized for next year, perhaps in the high season to give more tourists a chance to attend.

“The weather was good to us; I’m just happy the event took place, and I’m very proud of the results,” he said.

The Airshow and Family Picnic was proudly sponsored by the Phuket Gazette, PGTV and the ‘Phuket Today’ show, who were joined by a helicopter-borne Channel 7 crew in providing national TV coverage of the event.

For much more information, see the upcoming issue of the Phuket Gazette, which will feature an in-depth interview with death-defying Hungarian stunt pilot Les Vorosmarthy, the man who shocked the crowds with five performances over two days.

Classical concert for an urgent cause