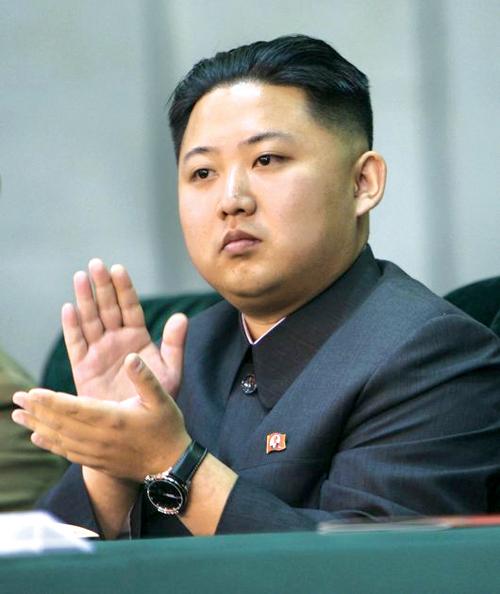 Rodman declared Kim to be an “awesome kid” and his “friend for life.”

The two were photographed laughing and clapping at a basketball game and giving each other a series of warm hugs. Below is a transcript of a private chat between the two, certified by authoritative sources as genuinely spurious:

Rodman: Dude! They tell me you’re gonna nuke my country.

Kim: My generals say I gotta.

Rodman: Who’s runnin’ this team, you or your generals?

Kim: I am. But Dennis, can I call you Denny?

Rodman: You can call me D-Rod.

Kim: I got a problem, D-Rod. My people call my grandfather Great Leader. They call my father Dear Leader. What should I have them call me?

Kim: No, it gotta be some kind of leader.

Kim: Oooo, I like that. The Cool Leader! Yes! (Claps hands in delight.)

Rodman: Dude, you ought to invite Barack Obama over here and shoot a few hoops with him. He plays basketball, you know. But lemme tell you, if you nuke the US, you’ll wipe out the Chicago Bulls.

Kim: We nuke around Chicago.

Rodman: Do You like movies, li’l dude? You gonna nuke Hollywood? No more Bruce Willis? No more Arnold? No more Angelina Jolie?

Kim: We nuke around Chicago and Hollywood. But for sure we gonna rain down hot death on rest of USA and drown all the rabid, imperialistic, cannibal, warmonger dogs in sea of fire. My generals say so.

Kim (hugging him): But we no nuke you, D-Rod, my friend. How you like to move to Pyongyang? We make you honorary citizen, give you lifetime supply of kimchi. You can escape the confragla…the conflagla…the confragra…the sea of fire.

Rodman: I’ll have to think about it. Listen, dude, you are my friend, and I love you. But I have to tell you, the US has an arsenal of hundreds of nuclear weapons all ready to go. You’re still in the testing stage.

You send up one rocket aimed at the US, and I guarantee you that within five minutes we will have in the air a fleet of missiles that will turn all of North Korea into instant oatmeal.

There will be nothing but one giant hole between the DMZ and the Manchurian border, and it will quickly fill with nuclear waste. Now, you’re a sweet guy, but I hope you understand that, little buddy.

Kim: Uhhhh…I tell my generals. Why should we bother bombing miserable bankrupt country like USA? Better to make more kimchi.

Rodman: That’s the spirit, li’l dude. And when I get back I’m gonna ask them to make me Secretary of State.

Ye Olde Curmudgeon can be flamed c/o s.tsow@ymail.com, except when he’s trying to imagine Dennis Rodman as Secretary of State.