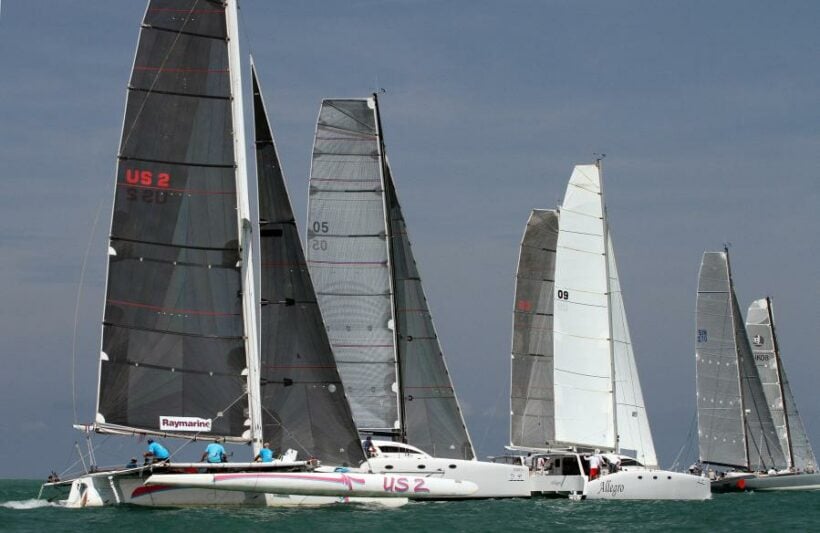 PHUKET: Entries continue to be received for the 14th Cape Panwa Hotel Phuket Raceweek which takes place July 19-23 off Phuket’s east coast. The four-day four-party format has proven popular with sailors from around the globe as the fleet is expected to grow to approximately 40 boats come race day, with up to 500 sailors from more than 25 countries taking part.

Kicking off the 2017/18 AYGP season, the line-up of monohulls and multihulls for this year’s award-winning Cape Panwa Hotel Phuket Raceweek is impressive in both quality and diversity, with a number of newcomers from around the world joining regulars from the Asian region.

The racing classes read like a who’s who of the Asian sailing scene, with Ray Roberts returning on his newly modified TP52 Team Hollywood (ex Kodo, ex Team Origin) and looking to defend his title, while Singapore-based sailor and stalwart of the Asian regatta scene, Sarab Singh, will be competing at Cape Panwa Hotel Phuket Raceweek for the first time on his custom Welbourn 52 Windsikher II (ex Hi Fi).

The two Sydney 40s Emagine (Scott Bradley) and Rerefine (Kenn Eyears) will be on the start line as Keith Garry’s X-412 BeauX Esprits returns together with the Swan 42 Loco, Niels Degenkolw’s Phoenix and an all-female team on the Farr 1104 Sailescapes Farrgo Ladies.

Newcomers in the cruising fleet include the 54-foot Swan Who Dares Wins, skippered by Ian Kennedy, and the Farr 11.06 Plus 16 which has sailed up from Australia especially to take part. They will join a strong local fleet including Chris Mitchell’s Lady Bubbly (second overall in the 2016/17 AYGP), Rick Blomfield’s Linda and Cape Panwa Hotel’s Kantus Bride.

The multihull fleet looks set to be the biggest ever with a packed one-design Pulse 600 class, up to seven of the super fast Firefly sport catamarans with crews from the UK, Germany, Australia, Japan and Thailand, and an impressive Multihull Racing class including no less than seven Stealth designs from the Asia Catamarans yard. Taking on the Stealth cats is the Seacart trimaran Thor, the Formula 40 trimaran Adrenalin and the 43-foot trimaran Tantrum Too, skippered by Robert van Paridon.

With the multihull fleet in the region growing, organizers have introduced a Multihull Cruising class for the first time this year. Already entered are MOJO, Siesta and Davinici with interest from more being received.

“The fleet already looks exciting and we are still taking entries. As awareness of the event continues to grow overseas, and word of what a great place Phuket is to sail and the exceptional service provided by host venue of Cape Panwa Hotel spreads, sailors from all corners of the world are putting Cape Panwa Hotel Phuket Raceweek on their must-do list of regattas in Asia,” commented Byron Jones, Managing Director of organizers Media Business Services Co Ltd, adding that “We expect about 40 boats on the start-line on race day.”

Excuse Buster: Importance of protein in our daily diets