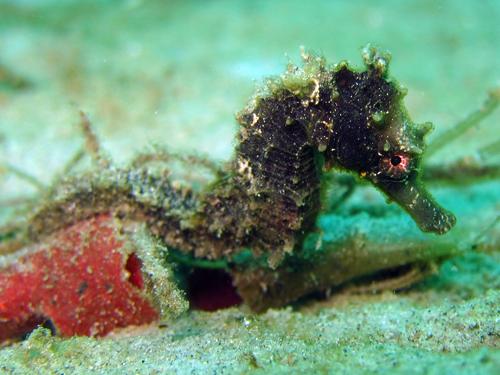 Following the lead of Vince Moy from Kiwidiver, we stomp across the sand of Kata Beach far from the northern tip, where the coral reef is located. The pictures on his camera from previous visits with guests are proof enough that there are treasures out on the submerged sand beds.

With thousands of dives as a professional, and hundreds on Kata Beach, Vince has strayed from the reef, and is now regularly finding and photographing species of sea horse, pipehorse and countless other marine creatures that are leaving even some experts scratching their heads in attempts to identify them. These discoveries aren’t from some tiny isolated island or difficult to access pinnacle of the coast of Borneo, they can be found in one of the easiest dive spots to access on an island with an international airport and a developed mass tourist market.

I, like many divers, have already accepted that there is the possibility of interesting creatures living out in the underwater deserts, those areas devoid of coral and even grass beds. However, I assumed it was mostly herds of goat fish, the occasional flat fish and of course some blue spotted rays.

In my mind, this landscape would no doubt be speckled with miniature reefs – a small coral head here, a discarded tyre offering cover to an eel there – just isolated bits and pieces of what could be found in abundance on the coral reefs themselves.

On our backs, we fin out to a point from which we can safely descend below any potential boat traffic, flash an okay sign and head for the bottom. Kicking across the sand, the minutes seem to drag out as we head towards the blue horizon. Vince’s eyes, already fine tuned to the sparse sand-scape, see potential; for me, the sudden clarity in the water allowing the light to play across the white sand is entertainment enough.

A longtail boat passes overhead with a roar, and then there is the welcome ‘ting, ting, ting’ of a tank being tapped. Vince points to the sand below me, and there,clinging to a broken branch of marine vegetation is a three spotted sea horse. Scanning the area it’s hard to imagine how this shy little creature ended out in the ‘open water’ with only two centimeters of tiny twig to hold onto, but it seemed content nonetheless.

Circling back around we drift over a sparse underwater grass bed, a patch no bigger than a one-room apartment. Blending in as best they can with tentacles lifted, flowing back and forth with the sea grass are a handful of small cuttlefish.

Vince begins to scour the grass bed. Specks of ‘sponge’ turn out to be tiny crabs, and then there, hanging on a blade of grass, is what we are searching for – a pygmy pipehorse. This tiny relative of the seahorse we spotted earlier is only one of what appears to be several species in the Kata Beach area. Dwarfed by even the girth of a pencil, the tiny pipehorse has wisps of fleshy growths intricately camouflaging his body.

After spotting one more of these little treasures, Vince signals that it’s time to sweep back out onto the sand. Away from the sea grass we pause over a fingered dragonet, an oddly formed and strangely finned fish.

With such a successful dive already logged and plenty of air left in our tanks, we continue to sift through the sand for more treasures – perhaps first-time encounters with new species of nudibranchs.

Not far away lingers the season’s treasure: peeking out of the sand as a slender dark black blob is something completely different – a mimic octopus.

Known to reside in the tropical seas of Southeast Asia, this stunning creature wasn’t discovered until 1998 off Sulawesi, then in 2010 it was confirmed to be in the Great Barrier Reef. However, it is most often found in the nutrient-rich estuarine bays of Indonesia and Malaysia – rarely holding shows in the waters of Phuket – though it does receive a brief mention in local guide books.*

Brown and white striped, the rare octopus begins a show.

Holding a pair of tentacles high, it mimics a crab before changing its mind and transforming into something completely different. The mimic octopus is known to portray itself as a variety of marine animals: sea snakes, lion fish, venomous sole, sea anemones and even jellyfish.

All octopus species are highly intelligent and can change the color and texture of their skin for camouflage, but until the mimic octopus was discovered, none had been observed mimicking the shape and behaviors of other marine animals.

Curious, the octopus reaches out for the camera seeming to crave the tactile contact, as if touching the camera might give it a better sense of how to mold itself.

Then in a frenzied flash of movement the octopus no longer resembles an itself in any way. Flat and wide, it effortlessly transforms into a sole fluttering across the barren sandy landscape.

* The original hard copy version of this story fails to cite the mention of previously confirmed sightings of the mimic octopus on Kata Beach, as well as references made to it in local dive guides.

This article appears in the current (May 4-10, 2013) issue of the hard-copy Phuket Gazette newspaper, now on sale at newsstands throughout the island. Digital subscribers may download the full newspaper, this week and every week, by clicking here.