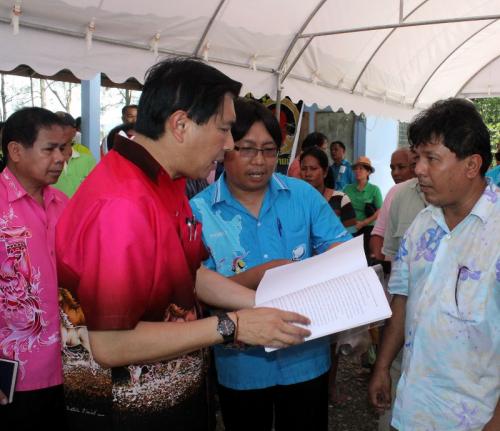 PHUKET: Illegal taxi drivers still attempting to serve passengers at Phuket International Airport filed a complaint with the Phuket Governor today, alleging they have been threatened, beaten and unjustly denied a way to provide for their families.

The complaint comes just weeks after the protesting taxi drivers, operating under the Mook Andaman Cooperative, won a reprieve and were allowed to have 25 of their members join one of the two taxi companies granted a government concession to operate at the airport (story here).

“We are in trouble. We cannot pick up any customers at the airport even though we have signed the memorandum of understanding [MoU] to provide 50 taxis at the airport,” said Mook Andaman President Songtham Mekmanee.

The MoU, allowing Mook Andaman’s former “black plate” taxi drivers to continue to serve the airport, was signed in November last year when the Airports of Thailand (AOT) allowed 50 drivers to operate under the two legitimate concession holders as a temporary measure (story here).

However, the development came to a screeching halt after Phuket Mai Khao Company claimed that the Mook Andaman cars failed to meet legal standards.

The complaint filed to Phuket Governor Maitri Inthusut by Mr Songtham and Mook Andaman Vice President Itthipol Mekmanee claimed that five members of their cooperative had been attacked so far.

“Some have filed a complaint to the Tah Chat Chai Police, while others are too afraid of influential people to do anything,” said Mr Songtham.

“Phuket Mai Khao said they needed more time before accepting our 25 drivers,” Mr Songtham said. “But this is just an excuse to keep us from serving the airport.”

Muummagaree Jatae, a Mook Andaman driver who was allegedly attacked, spoke with the Phuket Gazette.

“On April 27, I was walking around the domestic departure gate waiting for customers when about five men came out of nowhere and attacked me. They hit me on the head and shoulders right in front of the airport security staff. The staff did nothing until other people tried to stop the men,” he said.

“I’ve never had a conflict with anyone. I believe I was attacked because the men didn’t want me to pick up customers from the airport,” he added.

“On Wednesday, I was walking near the airport metered taxi counter and a foreigner asked me where the counter was, so I pointed him in the right direction,” Mr Manote told the Gazette.

“At that moment, three men attacked me. I know two of them, but I didn’t file a complaint to police,” he said.

“I have been working as a taxi driver at the airport for years – if I can’t work here, I have nowhere else to go.”

Governor Maitri, brought up to date about the situation, explained that the issue would be raised with the AoT Phuket director Prathuang Sornkham and he assigned Phuket Vice Governor Chamroen Tippayapongtada to take charge of the situation.