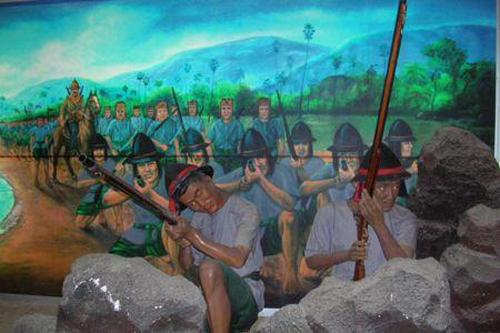 PHUKET: The Nine Armies’ War started in 1785 when the Burmese, taking advantage of internal strife and the overthrowing of King Taksin in Siam, invaded the country with forces numbering approximately 150,000 soldiers, divided into nine army groups.

One of those armies marched straight for Thalang, then the largest town in Phuket, and laid siege to it. During that time, the governor of Thalang and the only person who can organize the town’s defenses, passed away in the most untimely manner.

With the town in danger of being sacked, the governor’s wife, Lady Chan, along with her sister, Khun Mook, rallied the town’s fighting men and organized the defense of Thalang.

After five weeks of siege, Burmese supplies were dwindling fast. Lady Chan’s deception in making the Burmese think that her fort had a lot more men than it actually did, made the Burmese reluctant to launch a full scale attack. They retreated soon after, leaving Thalang’s townspeople victorious against all odds.

Lady Chan and her sister, Khun Mook became local heroines and the pair is still deeply revered in Phuket today.

In the aftermath of the invasion, the Burmese withdrew from the different regions of Siam. The defense of Thalang was one of the many heroic stories that emerged from this period in history. King Rama I bestowed upon many of these war heroes noble titles to show his appreciation for their bravery in defending the country.

After the war, towards the end of 1785, King Rama I appointed Phraya Surintharaja as his viceroy to the Siamese towns on the west coast. He also appointed Thongpun Na Thalang as the new governor of Thalang, giving him the title of Phraya Narong Ruengrit. Lady Chan was bestowed the title of Thao Thepkasattri, the highest noble rank a non-royal woman can achieve. Her sister Khun Mook was bestowed a similar title and became known as Thao Srisoonthorn.

According to the Thalang Letters, after the appointment of Thongpun as governor, Lady Chan and Phraya Thukkraj led a group of townspeople who were loyal to them out of Thalang town and migrated south of the island to Baan Sapam near today’s Phuket Town, away from Thongpun’s authority. There the migrants proceeded to set up a tin mine around the new settlement under Phraya Thukkraj and Lady Chan’s leadership.

In the year 1787, Lady Chan heard that Francis Light, an English captain who was an old friend of hers had successfully acquired Penang as a trading post for the British East India Company.

Captain Francis Light had lived and traded in Phuket for several years. His house was located in Baan Tha Rua, south of Thalang Town. Light left Phuket before the Burmese invasion. He was one of the first to spot the approaching Burmese army and warned Lady Chan of the imminent threat to the island.

After the war was over, Light offered to start up trade with Phuket again.

Knowing that Captain Light wanted to start trading with Phuket again, Lady Chan asked the captain not to trade or provide any European goods to Thalang in exchange for tin. The war had left Thalang’s coffers empty and trade was needed badly, but Lady Chan had her plans to oust Thongpun from Thalang’s governorship.

Instead she asked Captain Light to trade directly with her new settlement at Baan Sapam. The post-war crisis that the governor of Thalang was facing was soon exacerbated when the British, under Captain Light refused to trade with them, instead directing all European cargo to Baan Sapam.

Thongpun found it increasingly more difficult to send the required tin tributes to the royal treasuries in Bangkok as was mandated by the King. In contrast Lady Chan and Phraya Thukkraj had plenty of tin reserves to trade for foreign goods and they occasionally sent rich tributes to the King’s treasuries.

Thongpun’s only solution to raise money was to dig through some old unsettled accounts. He demanded Lady Chan pay for the debt her husband, the previous governor had owed to the crown. Despite her heroic feats and sacrifice in defending Thalang, the King’s treasuries had always reminded Lady Chan of her obligations to pay off her husband’s debt to the crown.

This time Lady Chan obliged by asking Captain Light to prepare for her a cargo of rare and expensive European goods that she personally took with her to Bangkok to present to King Rama I.

In 1791 Lady Chan also presented her daughter, Thong as consort to King Rama I. Thong was accepted into the palace, as one of King Rama I’s wives. She was bestowed the title of Chao Chom Manda Thong when she bore a daughter (Princess Ubol) for the King.

Lady Chan was not only a local heroine who helped defend Phuket through one of its darkest times, through her feud with the governor of Thalang, she also helped establish a rival settlement that would one day grow to become Phuket Town as we know it today.