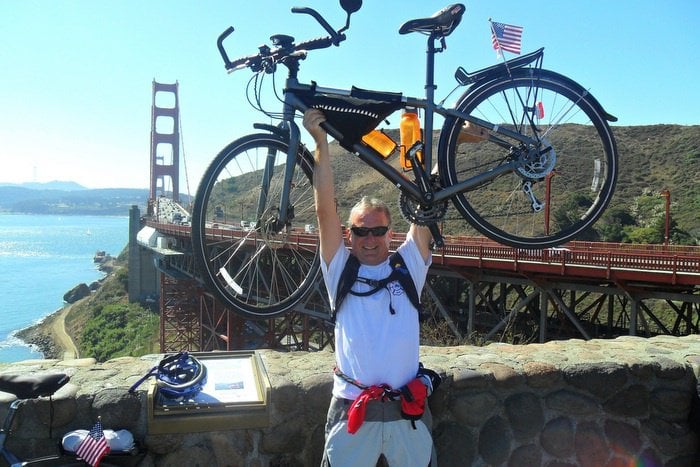 PHUKET: ‘INSPIRATIONAL’ is the word I would use to describe many of my fellow cyclists who I met when I cycled Bangkok to Phuket last December with Siam Bike Tours. However, one individual stood out above all others for his sheer bravery, tenacity and individualism – a 55-year-old Canadian Fire Department Captain named Rudy Pospisil.

Fifteen years ago, Rudy was diagnosed with cancer, a huge blow that would lay mo

The ride against cancer has taken Rudy around the world.

st people low and send them into mental and physical decline, but Rudy is made of sterner stuff in every sense.
He resolved to beat the disease, which he did, but not content with that, he decided to bicycle around the world as a means of raising awareness about the disease and also to raise funds to help fight cancer of all kinds.

Prior to his arrival in Thailand, Rudy had already cycled from his home in Vancouver, down the west coast of the US and then across the country from San Diego to Florida along the border of Mexico.

His next great leg was in Europe; from Portugal, across Spain, France, Switzerland and Germany and even into Istanbul. Then it was onwards across the Middle East and Iran, into Pakistan and across northern India.

When we met in Thailand, Rudy had already completed about half of his global ride, amounting to some 15,000-plus kilometers, and had scaled over 60,000 meters of vertical climbs, including such huge challenges as the St Gotthard’s Pass in Switzerland.

Cycling with Rudy on the Bangkok-Phuket leg of his 30,000 plus kilometer journey was certainly inspirational, and on this stage, he was accompanied by his charming wife and son.

His strength and determination were immediately evident and as he was gregarious and good natured, I was fortunate enough to learn something of his tremendous endeavor in his own words:
“The idea to circumnavigate the globe by bicycle was born when I was diagnosed with cancer 15 years ago. I survived and decided to do my part for cancer research. Over time my entire family was diagnosed with cancer, even my dog! “In each country I ride through I try to raise money for local charities and hopefully arranging ongoing fundraising events.”

Rudy’s Thailand adventure had started with a hike through the jungle at the Thai-Burma border, followed by 2,000km of cycling from Chiang Mai to Krabi.

I asked him if he was following a specific route: “I follow the circumnavigation rules set out by The Guinness Book of Records who’ve determined that to claim you have cycled the whole circumference of the globe the journey should be continuous and in one direction, and the total distance traveled by the bicycle and rider should exceed the equator’s length of 24,900km.”
Naturally I was fascinated by Rudy’s extreme motivation and the personal strength that allows him to keep going.

“It’s like asking people why they climb Everest. Why risk your life? It comes down to doing something you so strongly believe in and so you surprise yourself with a strength and determination you thought you never had. I knew I was a good cyclist since I started when I was six and I certainly believed in the charity and challenge strongly enough to do it.

“Plus, I knew it would inspire others. Many people cycle across Canada which is an extreme challenge in itself. I thought that since cancer is a global disease, cycling around the world would be a way of reaching everyone with my message. People email me all the time and follow my fundraisers… it inspires me,” he said.

To promote his amazing charity effort, Rudy carries a movie camera and shoots theater quality film. The movies are amazing and he gives talks and shows the films on each leg of his journey, leaving audiences stunned by the scenery and dangers he has encountered.

Following his Thailand trip, he will take a break and then carry on going from the north to the south of Australia, cycling from Cairns to Melbourne.

When I asked Rudy what kept him motivated, he said, “Mostly it’s the letters from people telling me to keep going, and the donations. Sometimes I find the poorest people give the most. That really inspires me.

“My aim is to make a difference, and this journey is not so much about fundraising as it is to draw people around the world together to finally end a disease that affects one in three of us. I hope to do this by inspiring
others to do similar events, promote awareness of these diseases and start ongoing events in places I visit. I am very happy to say that so far this has been successful.”

If you would like to join Rudy’s inspirational fight to eradicate cancer through cycling, he’d appreciate any donation you can spare.

Environment- University students head Down Under for inspiration