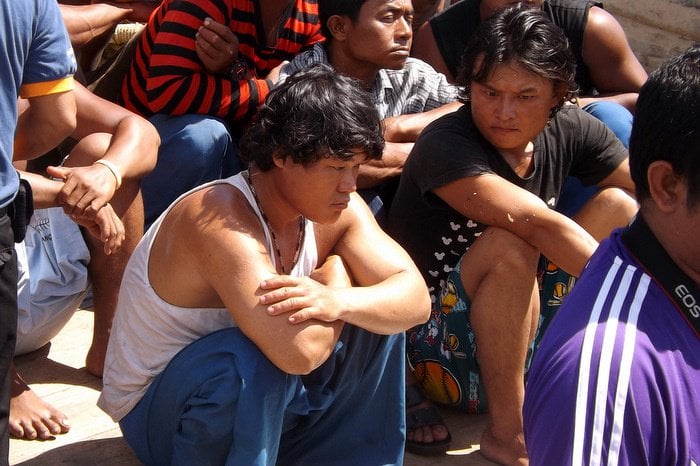 PHUKET: Governor Nisit Jansomwong yesterday joined a random inspection of three Phuket fishing boats near Rassada Pier as part of a nationwide crackdown on illegal trawlers and human-trafficking of migrant workers in the industry.

“The inspection focused on checking work permits and business licences, and to check on what the workers are paid and how are they treated by their employers,” said Governor Nisit.

The 47 workers – seven Thais and 40 Myanmar nationals – and the three fishing vessels were all found to be legal.

“Each fisherman receives a salary of 8,000 baht per month plus a bonus from the catch each month, which alone is about an extra 10,000 to 15,000 baht a month,” Governor Nisit noted.

“We will carry out random inspections every week. We know some boats in Phuket still do not have licences, but we are giving these boats until the end of May to register.”

After then, officials will crack down on any illegal workers and boat owners found illegally operating fishing vessels, the governor warned.

“They will be charged for operating an illegal, unreported and unregulated [IUU] fishing vessel,” he said.

The Ministry of Agriculture and Cooperatives is spearheading the recently-launched nationwide campaign against IUUs. Phuket, Chumphon, Ranong and Songkhla were the first four provinces in the country to pilot the crackdown (story here).

During his visit to Phuket early last week, Agriculture Minister Petipong Pungbun Na Ayudhya noted that the information gathered during a recent blitz on human-trafficking in Thailand’s fishing industry had helped paint a better picture of how IUUs were operating in Thailand.

“We are now working on collecting data in order to assess what legal loop holes there are and what needs to be done to better regulate the fishing industry,” Mr Petipong said.

“We aim to establish laws to directly resolve issues with IUU fishing vessels operating out of Thailand. This will give a positive boost to our fish-product export industry.”

The new fishing regulations are expected to be drawn up and implemented on May 6, but not officially signed into law until July, Mr Petipong said (story here).

Mr Petipong’s visit followed the seizure of Atlantic toothfish vessel Taishan in Phuket last month. The ship had already fled from the navies of New Zealand and Australia, as well as global conservation organization Sea Shepherd, before passing through Indonesian waters and mooring near Phuket (story here).

The inspection in Phuket yesterday coincided with similar checks in Chon Buri and Songkhla, carried out ahead of an upcoming inspection by representatives from the European Union (story here).

The European Commission on April 21 put Thailand on formal notice for not taking sufficient measures in the international fight against IUUs.

Thailand was given six months to implement a corrective tailor-made action plan, or face a ban on seafood exports to Europe (story here).