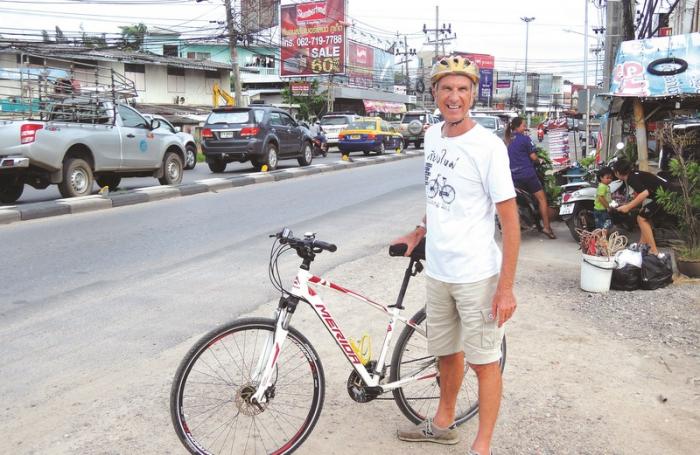 PHUKET: As so often happens in the frenetic super-connected era in which we now live, new terms and expressions go from obscurity to inhabiting the tips of our globally-connected tongues almost overnight.

So it is with the term ‘change agent’ which Bill Clinton memorably used to describe his wife Hillary at the Democratic Convention last week. Bill let us in on his secret that his missus was, “the best darn change agent I have ever met”.

If I were being unkind, I might suggest that Hillary might apply some of her amazing talent for change to her ubiquitous dowdy pant-suits, or that if Bill’s friend Monica had been a better ‘change agent’ of her dresses, then he might not have got caught. But then I’m not unkind, so I won’t.

Bicycles are without doubt monumental agents of change and many bicycles would, in my opinion, make better presidents than the candidates currently offered.

Bicycles change those who regularly ride them in all sorts of wonderfully positive ways. From physical health benefits, to mental outlook and focus, to better eating and sleeping patterns, to sociability and camaraderie, all the changes that cycling brings about are highly positive, if you don’t get involved in an accident… which is a big ‘if’ in the current Phuket environment.

Bicycles can also act as immensely positive change agents for the environment in which they are deployed and for the social and organizational structure of communities. This becomes abundantly clear if you compare commutes in bicycle-friendly cities, such as Amsterdam, Copenhagen, Brisbane, and even post Boris-Bikes London, to the daily commuter hell in which Phuketians are mired.

Last week I planned to use my bicycle as I always do, to run a few errands around the Chalong area where I live. Exciting visits to the laundry, Home Pro, Villa Market and my favorite wine shop were on my agenda. Imagine my chagrin then, when upon trying to get out onto Wiset Road I found a tailback of almost a kilometer, stretching back well past Fisherman’s Way where I live.

Undeterred, I plunged into the stationary traffic replete with its retinue of fuming drivers and tailpipes and cycled down to the traffic-clogged Chalong turning circle and managed to complete my errands in about 30 minutes.

While I had to endure the horrible pollution being pumped out by all those stationary vehicles, had I tried to do the same errands by car, I might well be stuck in that traffic to this day.

The point is, that as an agent of changing the way we live, interact and move about, bicycles could have an enormously positive impact on the lives of all Phuketians if only we could give them a chance.

Of course not all journeys could be switched to bicycles overnight, but a lot of them could be, and the effects on our health, well being, environment and overall contentment would be dramatic.

The two key progenitors of such a positive change in Phuket are clearly marked cycle-paths separated from vehicular traffic and a pay-as-you-go bike rental scheme, both of which are simple and inexpensive to implement.

Sadly, though, it seems that the likelihood of such a positive agent for change being introduced into Phuket is about the same as a sane billionaire property developer becoming the next incumbent of the White House.

Ajarn A and his ‘magical’ tattoos