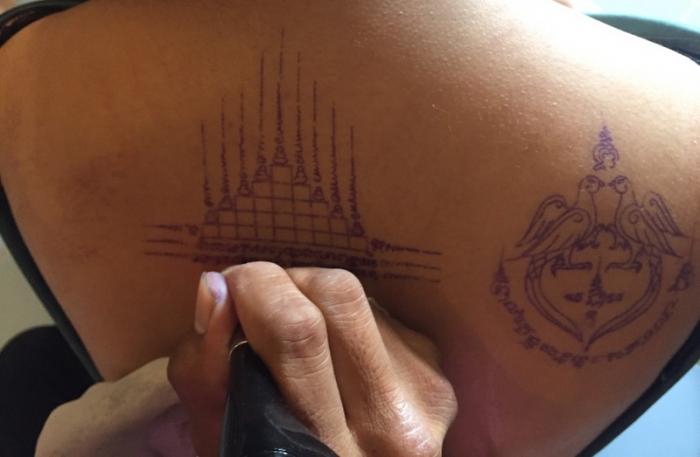 PHUKET: With the answer to any question just a few taps away on a mobile phone, why do certain superstitions and beliefs in the supernatural still exist? If you’re one of Phuket’s magic tattoo masters, the answer is in the currency of belief.

“Things exist only because people believe in them,” said Bunphet Limlai, who goes by the name ‘Ajarn A’ – where Ajarn means teacher or master – one of Phuket’s masters of magical tattooing.
“In contrast, if no one believes in something, it’s as if that thing never existed,” Ajarn A said.

The tattoos, called ‘Sak Yan’, and their process, ‘Yantra’ tattooing, originated thousands of years ago in ancient Cambodia. Sak means ‘tattoo’ in ancient Khmer, and Yan means talisman. Together, the words mean that the tattoo is imbued with a supernatural power.

Sak Yan have been popular among the native populations of Thailand, Cambodia, Myanmar and Laos for years. However, the tattoos started to become well-known to westerners, particularly after actress Angelina Jolie received a tattoo in 2003 by Ajarn Noo Kanpai.

In Phuket, Ajarn A is one of the most famous Sak Yan tattooists. From his shop near Siam Niramit on the Bypass Road, Ajarn A tattoos Sak Yan for good luck in wealth, work or love, either with visible black ink or with a non-visible oil.

The holy oil-based tattoos disappear after a week, but supposedly maintain their magic properties. They have gained popularity among those who do not want tattoos to remain on their body forever.

“We all need money, and when you only have a little bit, you will do whatever is necessary to earn more,” Ajarn A said. “But when you cannot work any harder than you already are, human nature makes us turn to the supernatural for help. Tattooing stems from that belief.”

Ajarn A has been interested in the supernatural for over 23 years.

“Whether or not it has real magic, all that really matters is whether you believe in it,” he said. “If you believe in something, it exists. Magic tattooing has been present in Thai society for years. If there were no results, it would have died out. People believe in magical tattoos because it makes their lives better,” he added.

Ajarn A started his Sak Yan business in his hometown when he was around 20 years old, and when it became popular enough, he brought his business to Phuket.

On an average day, Ajarn A has about 40 customers, both getting tattooed and receiving blessings. An average tattoo costs 500 baht.

“Even though it’s a business, it takes a lot of knowledge, and there’s a culture at work behind the Sak Yan. I have been working hard to learn it since I was 17 years-old. It is a very rare form of knowledge and is growing increasingly esoteric,” Ajarn A said.

“During my monkhood in Ratchaburi Province, I met a magic tattoo artist called Ajarn Kan. He was famous for supposedly having his tattoo protect him after he was shot in the head. I started to get along with him and learn from him.

“Many unbelievable things have happened to me since then, which made me continue pursuing this field by learning fortune telling, bone healing and love spells.”

“My life goal is that I am going to use the money I earn from this to build a sala [pavilion] in my hometown. Inside, I will build a shrine dedicated to each of the 108 hermits, so people do not have to go to many different places to pay their respects. I will also write down all of this knowledge on the walls there, so the next generation can go there and learn,” Ajarn A said. “It is part of our heritage of ancient Thailand, and I don’t want it to disappear from Thai society”.