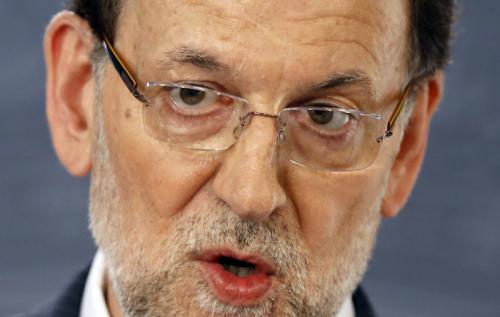 
Spain’s Rajoy rules out stepping down in blackmail scandal
Reuters / Phuket Gazette
PHUKET: Spanish Prime Minister Mariano Rajoy on Monday rejected calls to resign over a ruling party financing scandal and said he would not allow the matter to hold back his reform plans.

The political pressure mounted on Rajoy as the former treasurer of his center-right People’s Party gave new testimony before a judge looking into the affair, saying he had made 90,000 euros in cash payments to Rajoy and party secretary-general Maria Dolores Cospedal in 2009 and 2010.

Rajoy had so far managed to limit the impact of the scandal, which involves alleged illegal donations by construction magnates that were supposedly distributed as cash payments to party leaders in return for juicy contracts.

“I will defend political stability and I will fulfill the mandate given to me by Spanish voters,” he told a news conference.

Rajoy, whose party has comfortable control of parliament, said the scandal would not derail his political reform program, aimed at combating a deep recession and a huge hole in the budget.

Spain’s fiscal woes last year threatened to push it into seeking a bailout and for months the future of the common currency looked at risk as the euro zone’s fourth biggest economy teetered.

Rajoy resisted pressure to solicit aid and is now hopeful of an economic turnaround, but his public image has been damaged by the Barcenas scandal.

The opposition on Monday demanded that he quit on Monday, and some members of his own party also said it was time for him to step aside.

“The PP may have an absolute majority but it has lost moral authority,” said the opposition Socialists’ deputy secretary general, Elena Valenciano. “We are going to work with all the parties to make the prime minister step down.”

At the heart of the scandal is former party treasurer Luis Barcenas, 55, who was arrested in June and charged with bribery, money laundering, tax fraud and other crimes.

High Court Judge Pablo Ruz questioned Barcenas behind closed doors for almost five hours on Monday after he was transported from jail in a white and black van.

Barcenas, once a trusted aide, turned over documents showing how he ran a secret slush fund at the party for many years, and provided details of years of cash payouts to party leaders, according to a source with access to the court proceedings.

Over his more than 20 years handling PP finances, Barcenas accumulated as much as 48 million euros in Swiss bank accounts that prosecutors say he has failed to adequately explain.

Rajoy is not charged with any crime and has repeatedly denied that he or other party leaders received illegal payments. PP Secretary-General Cospedal held a news conference on Monday evening where she also denied any wrongdoing.

“I don’t have anything to hide and I am not going to let a suspected criminal slander or tarnish me so he can get out of what he supposedly did unscathed,” she told reporters.

However, text messages between Rajoy and the man he made treasurer in 2008 published in the newspaper El Mundo over the weekend showed the two were personally in touch as recently as March and that Rajoy had tried to limit the damage from the affair.

Rajoy acknowledged the text messages were genuine and said they showed that he had not caved in to blackmail from Barcenas.

Inside the PP, politicians are increasingly convinced that Rajoy has lost credibility with voters tired of high unemployment. Support for the party has dropped to 25 percent from 44 percent in the 2011 election, according to a poll by Metroscopia.

The Spanish prime minister is known for a cautious political style in which he wears out opponents with a waiting game. But the strategy is wearing thin.

“Almost everyone in the party is convinced that the situation is beyond repair. The best option for Rajoy is to organize a process of handing over leadership to someone else in the party,” said a PP parliamentarian who asked not to be named.

Another party insider, who also asked not to be named, said Deputy Prime Minister Soraya Saenz de Santamaria was one person who could succeed Rajoy because she is seen as part of a newer generation of leaders not touched by the Barcenas scandal.

Under Spain’s constitution, parliament can choose a new prime minister without calling an election. If the PP bench do not split over the scandal, they have enough seats to make sure the new leader comes from their party.

The Socialists, who have around 22 percent support in surveys, down from 31 percent in the 2011 election, have little to gain by forcing a dissolution of parliament and an early election.

“The Socialists don’t have the seats to call for a vote of no confidence,” Carlos Floriano, deputy secretary of the PP, told reporters.

Rajoy does, however, face unusually combative media. Past Spanish leaders could count on support from one of the main newspapers, the left-leaning El Pais or the right-leaning El Mundo. But both papers have reported the Barcenas scandal aggressively, and El Mundo’s editorial stance has become increasingly anti-Rajoy.

Economy Minister Luis de Guindos said on Monday the affair was not hurting Spain’s reputation with foreign investors and that he was more concerned about public opinion at home.

But an International Monetary Fund report on Spain’s banking sector, bailed out last year with 41 billion euros ($53.5 billion) of European aid, brought an unwelcome reminder of the challenges facing the government.

The fund said on Monday the banks’ solvency rates had improved but economic problems meant Spain’s credit crunch was worsening. It said the government might be forced to rethink its plans for restructuring the sector, saddled with billions of euros in soured loans following a 2008 property market crash.

The premium that investors demand to buy Spanish bonds rather than safer German bonds has risen in recent days on fears that political instability in Portugal could exacerbate the euro zone crisis again, and on credit rating cuts for Italy and France. But on Monday the premium narrowed slightly, to 312 basis points.

“For the moment, the market is taking the view that the Barcenas case does not imply an immediate exit for Rajoy,” said Javier Galan, a fund manager at Renta 4 in Madrid.

The activists, dressed in red, said they reached the walls of two reactors at the Tricastin plant, one of France’s oldest. EDF denied they had got into any “sensitive areas” and said production was not affected.

Interior Minister Manuel Valls called for an investigation into the intrusion which raised questions about the security of France’s 19 nuclear plants and 58 reactors.

The protesters who entered the plant at dawn unfurled a yellow and black banner on a wall above a picture of President Francois Hollande, marked with the words: “Tricastin, nuclear accident – President of the catastrophe?”