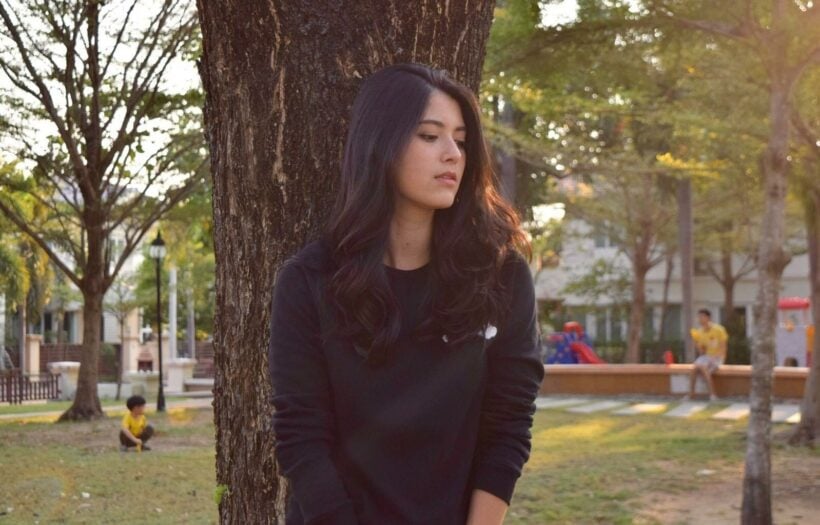 The 19 year old Thai-French girl who was born on the island of Phuket, Sophie Marguerite Indracusin, is widely known as an actress working with Channel 7 and has been shining in through television shows and dramas as the main role for years. Now it’s time for her to introduce another perspective of herself, through her first single ‘Mary Jane’.

How did you start singing?

When I was younger, I didn’t have enough self-confidence so when I wrote a song, I always ended up thinking that it wasn’t good enough and I quit, even though it could have been a great piece. After gaining all my experience through hard work and studies, I started to believe in my abilities so I decided to make this single. Since I was 12-13 years old, music companies had been contacting me to work with them but I thought that I was still too young and that I didn’t find my own character and my way of music. Now, at 19 years old, I feel more like who I am in all perspective; work, personality and music style.

How did you start writing the song – Mary Jane?

Actually, I love music since I was a child just like my brother [Chinawut ‘Chin’ Indracusin] and I like to write songs and poems since I was young but I had never finished one. I was also very busy with the final year of my studies at the university as well as with the work as an actress on Channel 7 so I didn’t have time to start making a song seriously. This year, I started to have more time from the university and from my acting career. Mary Jane is the first song I finished writing. I produced it with my brother and released it on February 14. This production opened my eyes to the backstage work. I used to only sing for the TV dramas but never learned the producing process. This song production allowed me to learn it all and I will continue to learn so I can work on my songs even more professionally.

Why Mary Jane? and how’s the feedback?

Mary Jane, as we all know, is another name for marijuana. This song explains about a relationship, like when someone makes you feel very good and you are addicted to it, even though you know that it would be bad for you. You are getting high in the relationship and in the end, you’ll find out that it makes you a worse person. Another reason behind the name is to remind people about something they are addicted though they know it’s bad for their life. It depends on personal experience to relate to this song.

The feedback has been great. People never thought I would make a song like this as they saw me singing only pop and Luk Tung in the past. This song isn’t that mainstream; It’s alternative soul with a mix of electronics. There will be a story book of 6-7 songs telling a story that continues in each song and Mary Jane is the first one. The following ones may not have the same style but will still consist of similar elements.

In a near future, I may invite my brother to feature a song and possibly invite some DJs to join the production to add more essence to the beats.

How does the acting skill help with the new role in music?

Acting skill helps optimizing my dancing and singing performances. It makes me express myself better. Sometimes, I would feel nervous if I do something I’m not used to or worried that I wouldn’t reach the note when singing. After gaining acting experience through the work and acting classes, it has taught me to get out of my comfort zone and discover new things. I can do better on stage, both singing and dancing, because of the acting skill. On the other hand, the dancing and singing skills also help me for the acting. There was a TV drama that I had to sing and dance in a Luk Tung (Thai country) style. All the skills I learned actually helped boosting each other.

Apart from singing, dancing is another important part of you. How has that happened?

Since I was about 5-6 years old, dancing has always been my passion. Dance class was the place I went when I was stress and tried, also when I felt happy. It’s in my blood as my mother and my brother both love dancing. Dancing is one thing that I have done for my entire life. I have started to make it more serious lately by arranging workshops and joining dance camps. It’s beneficial to my career in the entertainment circle as well. This August, I’ll come back to teach at AsiaCamp Junior in Phuket after joining them to train last year. I had an opportunity to meet with the organizer who saw the potential in me and invited me to be the junior camp mentor this year.

The influence from mother who loves dancing

She sent me to a ballet class since I was young as it helps about manner, posture, balance and patience. Since then, I felt in love with dancing but went more into the street side. It’s great that she introduced me to dancing because since then, I have never left it.