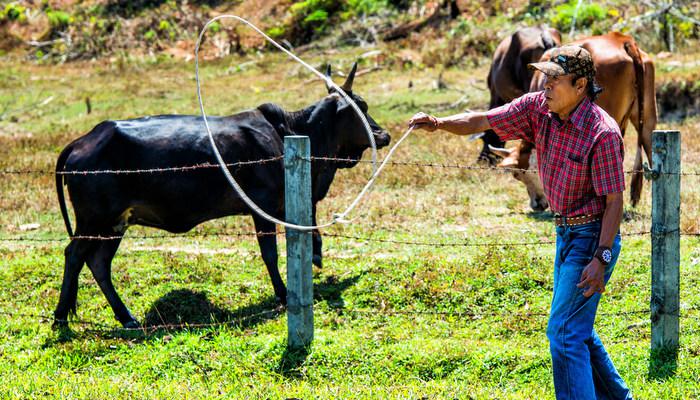 PHUKET: With more people on the planet, nearly infinite methods of communication and a travel culture that sees people from all walks of life turning up in the most unsuspecting places, there is no telling where you might find influences from foreign cultures.

For example, if Phuket entertainer Manoo Suwanmaneesilp hadn’t somehow gotten the chance to see old black-and-white westerns from the US when he was a kid, it’s unlikely he would have adopted his cowboy persona “Mike Roper”.

With a drastically different landscape than the American West, and lacking the history of a strong beef and cattle market, cowboy culture can seem a little out of place here in the Land of Smiles. But that hasn’t stopped some Thais from becoming enamored by cowboy culture and adapting some of the wild west into their own lives.

One thing Mike saw in those old cowboy movies that struck a chord with him was the creative and nimble rope skills that the wranglers of the west developed to be able to do their jobs, and eventually elaborate on to show off. And if his name didn’t give it away already, Mike has, to an extent, aligned his identity with that of the rope-slinging kings of the west.

There is no lasso school in Thailand, and certainly very few individuals who have figured out how to perform these difficult tricks, so Mike has been on his own, “I’ve learned it over five years. I learned it myself,” says the unassuming 73-year-old.

However, there is only so much that can be deduced from old cowboy movies, so Mike did the logical thing.

Not only does Mike have an arsenal of rope tricks that he has been perfecting over the years, he has done his research and learned the history of the tool turned sport, “It is the hallmark of the Mexican cowboy, and later on it spread to North America and Canada.”

Believe it or not, Mike isn’t the only cowboy enthusiast in Thailand. In the north, about two hours from Bangkok, is Chokchai Farm, a popular weekend getaway for Thais and a type of informative museum on western cowboy culture. Although he would like to, Mike has yet to make the pilgrimage to this little slice of west in the east.

Mike is keen on sharing his skills with others, he is not only available for hire for entertainment at restaurants, clubs and parties, but he is also willing to teach his hard-earned skills to those who are interested in carrying on the lasso tradition.

To learn takes considerable patience and many don’t have the nerve to continue, “I used to teach my nephew, but finally he surrendered,” exclaims Mike.

Lasso is much more than swinging a rope around and tossing it over something. You must know the types of rope to use which need to be a certain thickness and stiffness as well as the appropriate knots to use.

When asked if it is a skill someone can learn if they pick up a length of rope, Mike simply stated, “No, if you don’t know the technique, you cannot do it.”

Interested in learning rope tricks or would like to hire Mike Roper to demonstrate his abilities at an event? Contact him at 084-447 5257 or email at mikeroper2003@gmail.com

Putting the ‘I’ in your Phuket garden