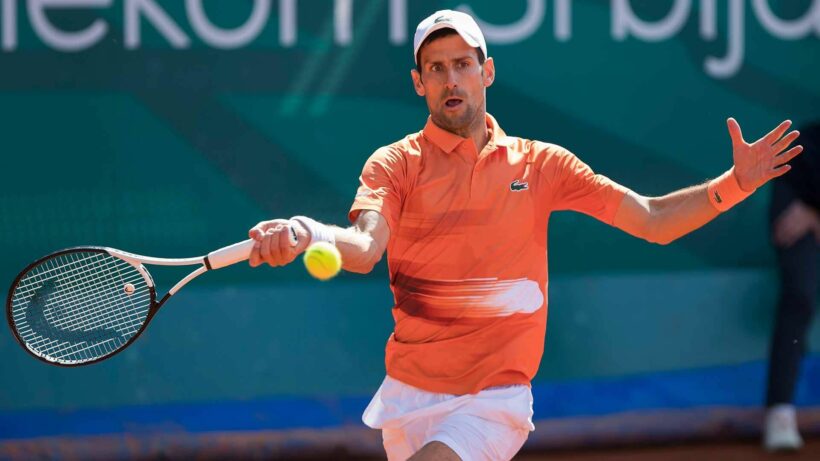 The world’s most polarising tennis player will be able to keep his anti-Covid-vaccine stance while competing for yet another historic grand slam title.

Novak Djokovic – whom vaccination proponents dub “Novaxx” – will be allowed to defend his title at Wimbledon in June, following an announcement from the tennis tourney’s organisers, who said Covid-19 restrictions at the event will align with the UK’s current law for international travellers.

Speaking at news conference on Wednesday, Sally Bolton, the chief executive of the All English Lawn Tennis Club, said… “The requirement set out by the government to enter the UK does not include mandatory vaccination. Therefore, while it is of course encouraged, it is not a condition of entry.”

In other words, unvaccinated players like Djokovic may compete. It’s music to the ears of the men’s world No. 1 tennis player , who earlier this year was prevented from competing in the Australian Open in Melbourne, after a series of courtroom battles with Australian authorities — dubbed the “Djokovic Saga”.

His forced exit from the tournament down under proved a bitter pill to swallow. It opened the door for longtime rival Rafael Nadal to claim the crown, snapping the three-way tie among the Big Three who at the time each had 20 grand slam titles to their names.

Now Djokovic remains tied with Swiss great Roger Federer for the second most grand slams of all time.

After missing out on the Australian Open in January, Djokovic was then unable to participate in other ATP tournaments in the US, Miami and Indian Wells and Miami, due to Covid-19 rules regulations for international travellers to the United States.

It also resulted in his losing the World No. 1 ranking, which he has since reclaimed after other countries came to their senses and let go of their draconian Covid-19 vaccination requirements for international travellers.

In February, Djokovic, 34, told the BBC he was willing to miss out on future grand slams like the French Open and Wimbledon in order to maintain his no vaccination status. Even if it means sacrificing his chances of going down in history as the greatest tennis player of all time, “That is the price I am willing to pay”

“Because the principles of decision making on my body are more important than any title or anything else. I’m trying to be in tune with my body as much as I can.”

This year’s Wimbledon tournament will take place from 27 June to 10 July in London. The world’s oldest tennis tourney, it has been held annually since 1877.

BBC Host: You had an interesting few month, leading news bulletins around the world with your attempt to gain entry into Australia and compete in the Australian Open, but you’ve kept mostly silent, until now. Why have you agreed to this interview?

Novak: The reason I’ve been silent up till now is that I wanted to respect my colleagues, tennis, Australian Open, and obviously prior to that the legal processes that I was part of. And also I wanted to take some time to reflect on everything that has happened because there was a lot of emotions

BBC Host: Do you feel that you’ve been misunderstood or misrepresented in recent weeks?

Novak: I feel there was a lot of wrong conclusions. And you know I was really sad and disappointed with the way it all ended for me, in Australia, and um, you know it wasn’t easy also following the media and everything that was written about me in the previous four, five weeks. So I’m happy that you know at least I get a chance today to speak to you and to tell you my part of the story.

BBC Host: To the ordinary Australian listening to you right now, who has endured immense sacrifices and restrictions on their liberty over the past coupe of years, but who looks at you and says based on what they see in the news, this guy thinks he’s above the law, he thinks that he doesn’t have to abide by the same rules as everyone else.

Novak: Australia has gone through one of the most sever lockdowns that we’ve had since the beginning of pandemic. So I can only imagine how hard it was for Australians and I sympathize, empathize with all the people. And I understand that there’s been lots of, say, frustrations from Australian people towards me and towards the entire situation and the way it was dealt with. And I understand it as well, reading newspapers you get certain conclusions and so I want to tell them that I always follow the rules.

Novak: So when the Australian Prime Minister Scott Morrison says…

BBC Host: Have you received any vaccination against covid?

Novak: I have not.

Novak: I understand and support fully the freedom to choose whether you want to get vaccinated or not. I have spoken about this before and I have not disclosed my my medical records and my vaccination status because I had the right to keep that private and discrete. But as I see there’s a lot of wrong conclusions and assumptions out there. I think it’s important to speak up about that and justify certain things right. So I was not ever against vaccination. I understand that globally everyone’s trying to put a big effort into handling this virus and seeing hopefully and soon to this virus. And vaccination is probably the biggest effort that has been made, probably half of the planet was vaccinated. And I fully respect that. But I’ve always represented and always supported the freedom to choose what you put into your body. And for me that is essential. It’s really the principle for understanding what is wrong and what is right for you. And for me as a professional athlete I’ve always carefully reviewed, assessed everything that comes in, from the supplements, food, the water that I drink or sports drinks, anything really that comes into my body as a fuel, based on all the informations that I got, I decided not to take the vaccine as of today.

BBC Host: So do you have… as of today.

Yes, I keep my mind open, because we’re all trying to find collectively a best possible solution to end covid, right, I mean no one really wants to be in this kind of situation that we’ve been in collectively for two years. I’m part of the sport, a very global sports, that is played every single week in a different location. so, you know, I understand the consequences of my decision. and one of the consequences of my decision is not going to Australia and I was prepared not to go. And I understand that not being vaccinated today I, you know, I am unable to travel to most of the tournaments, at the moment.

BBC Host: Is that the price you’re willing to pay?

Novak: That is the price that I’m willing to pay.

BBC Host: Ultimately, are you prepared to forgo the chance to be the greatest player that picked up a racket, statistically, because you feel so strongly about this jab.

BBC Host: But as things stand, if this means that you miss the French Open, is that a price that you’d be willing to pay?

Novak: Yes, that is the price that I’m willing to pay.

BBC Host: And if it means you miss Wimbledon this year, again, that’s a price you’re willing to pay?

Novak: Because the principles of decision making on my body are more important than any title or anything else. I’m trying to be in tune with my body as much as I can.

BBC Host: What do you say directly to anti vaccination campaigners around the world who proudly declare Novak Djokovic is one of us.

Novak: I say that everyone has the right to chose, to act or say whatever they think is appropriate for them. And I have never said that I’m part of that movement. You know, no one in the whole process, during Australian saga has asked me on my stance or my opinion on vaccination. No one. So I could not really express, you know, what I feel and where my stance is, neither in the legal process, neither outside. So it’s really unfortunate that there has been this kind of misconception and wrong conclusion that has been made around the world based upon, you know, something that I completely disagree with.

Poolie
He he, ooh you've called him a naughty nickname. You little Devils. You are daring! 🤔 If somewhat childish.