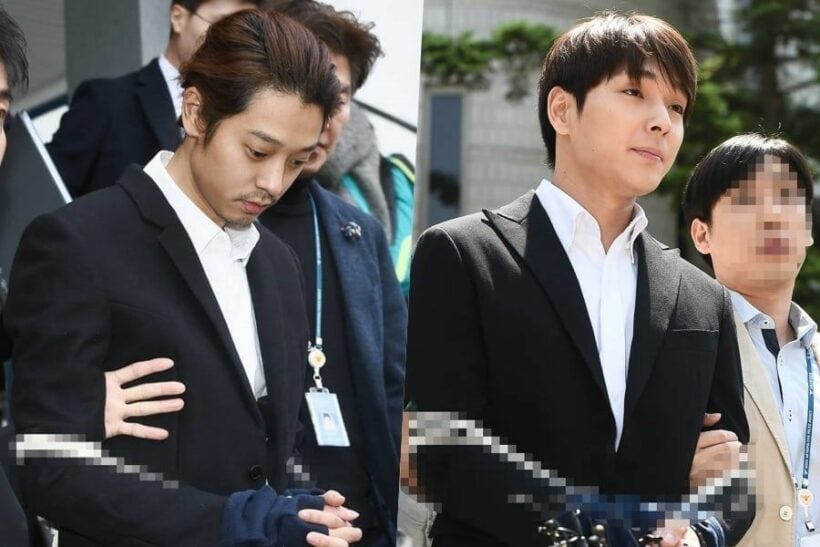 30 year old K-Pop singer and songwriter, Jung Joon-young, and 29 year old musician Choi Jong-hoon have been convicted of conspiring in the sexual assault of a woman who was incapable of resisting. The decision was handed down by the Seoul Central District Court yesterday.

The Court also found Jung guilty of filming women against their will and then sharing the sexually explicit material to an online group chat. The judge handed down a six year prison term for Jung, and five years for Choi. As part of the sentence, both men will be required to complete 80 hours of an anti-sexual violence program.

The latest development in the sex-abuse scandal has shocked South Korea and its glossy music industry aka K-Pop. The industry has also had a three high profile suicides of popular K-Pop idols over the past few years.

The so-called “Burning Sun” scandal first came to light in March this year. The Seoul Metropolitan Police claim that the Burning Sun club, located in Seoul’s trendyGangnam area, was the site of “bribery, violence against customers, rape, drug trafficking, drug use and securing prostitutes for VIPs”.

South Korean police accused Jung and Choi, among 10 other members of the group chat, of sharing sexually explicit material that was later found to have been filmed without the victim’s consent.

Jung was arrested several days later. He admitted to the charges and made a public apology to his victims.

At the time there was a separate probe into K-pop idol Seungri. An idol (K-Pop star) in Big Bang, who was also doing the PR for Burning Sun. Seungri was accused of procuring women for prostitution, and was also in the same group chat with Jung Joon-young and the others. Soon after the 28 year old announced his retirement from the entertainment industry claiming he was being “treated as a nation’s enemy”.

Any quick look at the highly produced K-Pop video clips, certainly in the past two decades, will see polished and glossy production with men being ‘men’ and the female groups relegated to looking pretty, girlie and ‘sexy’ – a pop stereo-type that had faded in the west long before. The clips were just a representation of a larger toxic attitude to women and beauty in South Korea.

The sad revelations about what was really happening behind the scenes of the highly produced and glossy K-Pop world has forced South Korea and the multibillion-dollar K-Pop industry to reassess its attitudes toward women. Within a month, four other major idols publicly apologised, some announced early retirement after being linked to the group chat.

Later in March, another investigation found 1,600 people filed reports of being secretly filmed in rented hotel rooms, with the footage emerging on live-streams to over 4,000 customers.

The serious scandals call into question K-Pop’s squeaky-clean image. Idols, selected from exhaustive auditions and groomed as performers from an early age, are expected to conform to notoriously high standards of social conduct. Their production companies impose contracted restrictions on who they can date, what will happen on those dates, what they wear, what they post on social media, and how they behave.

The number of new infections in Japan has been growing sharply since last November. Last Tuesday, Japan saw a rapid increase of new infections, including Tokyo. According to the WHO’s report as of yesterday, Japan recorded 4,587 new cases, 360,661 confirmed cases and 5,019 deaths.

In Japan, local public health officials are in charge of arranging hospital stays and treatment for people infected with the virus as well as the appropriate accommodation for people with mild symptoms. The process of making those arrangements is taking longer, and the newly infected people are forced to stay home because of bed shortages. Some are reported dead in their houses.

A survey by Kyodo News found Tokyo had the most infected people waiting to be hospitalised or accommodated at other facilities, jumping 4.8 times from 1,563 as of December 19 to 7,539. Every prefecture has reported a similar rise.

Screenshot via The Independent

Violence broke out in the Netherlands and a Covid-19 testing centre was burnt down after a nationwide curfew was imposed over the weekend to help slow the spread of the coronavirus. In Eindhoven and Amsterdam, riot police deployed water cannons to disperse the crowds of anti-lockdown protesters.

The Netherlands has been under a tough lockdown since mid-December, leading to clashes between anti-lockdown protesters and police. Just last week, police in Amsterdam used the water cannon on hundreds of protesters. Local officials say the riot police had been called to break up the crowd because people weren’t abiding by social distancing measures.

On Saturday, a new 9pm to 4:30am curfew was imposed, tightening the already tough restrictions. As the curfew went into effect that night, rioters set fire to a portable coronavirus testing facility by a harbour in Urk, a fishing town around 80 kilometres northeast of Amsterdam. That night and early the next morning, 3,600 people in the Netherlands were fined for breaching the new curfew. Police say 25 people were arrested for breaching the curfew and violence.

Local officials say the riots in Urk were a “slap in the face, especially for the local health authority staff who do all they can at the test centre to help people from Urk.”

The next day, in the southern city Eindhoven, rioters threw rocks at police and set fires in the centre of the city. Riot police used water cannons and tear gas to break up the crowds. Rocks and shattered glass littered a central square in the city. At least 55 people were arrested, according to the Associated Press.

In the capital of Amsterdam, police used a water cannon to break up a group of anti-lockdown protesters. The Associated Press says more than 100 people were arrested.

Asia’s biggest drug kingpin is under arrest in the Netherlands after years of authorities chasing him worldwide. 57 year old Tse Chi Lop, a Chinese-born Canadian citizen, was arrested by Dutch police acting on a request by Australia’s federal police.

The UN Office on Drugs and Crime named him as the suspected leader of the Asian mega-cartel known as “Sam Gor”, a major producer and supplier of methamphetamines worldwide. Tse is commonly compared to the Mexican drug lord Joaquin “El Chapo” Guzman.

Sam Gor is suspected of laundering billions in drug money through businesses such as casinos, real estate and hotels in Southeast Asia’s Mekong region. Australia’s federal police said Friday’s arrest came after a 2012 operation that arrested 27 people linked to a crime syndicate spanning five countries. The groups was accused of importing large amounts of heroin and methamphetamine into Australia, according to police.

“The syndicate targeted Australia over a number of years, importing and distributing large amounts of illicit narcotics, laundering the profits overseas and living off the wealth obtained from crime.”

The arrest of Tse Chi Lop almost 10 years after that operation’s launch is a major break for Australian authorities. The country’s attorney-general will now begin preparing a formal extradition request for the alleged drug lord to face trial.

Most of Asia’s meth comes from “Golden Triangle” border areas between Laos, Myanmar, Thailand and southwest China. The production of methamphetamine, either in tablet form or the highly potent crystalised “ice” version, take place in Myanmar’s eastern north Shan state. Ketamine and fentanyl are also produced there as well, mostly in ‘portable’ labs that hide underneath the thick rainforest canopy.

In 2018 alone, Thailand netted more than 515 million methamphetamine tablets, a number 17 times the amount for the entire Mekong region 10 years ago. Traffickers are constantly finding more creative ways to ship their products as drug busts are featured daily on the news in those regions.

Chatuchak market is in worst crisis in 5 decades due to Covid-19, vendors say

Hotline set up for reports on alleged Covid-19 measure violations

Eating out until 11pm in Bangkok is waiting for approval