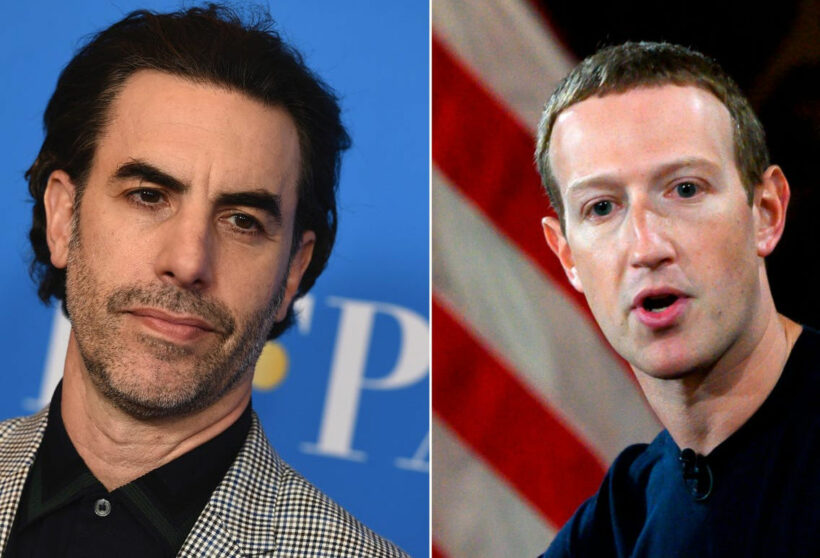 “The Silicon Six – all billionaires, all Americans – who care more about boosting their share price than about protecting democracy.”

Sacha was accepting an award when he opened up on his thoughts on modern social media and its impact on democracies and the weaponisation official media by politicians.

He said that social media was “stoking the fires of bigotry and enabling the spread of dangerous conspiracies, often fueled by algorithms designed to keep consumers hooked”.

He pointed the finger at social media companies, particularly Facebook, for the way they provided far-right conspiracy theorist Alex Jones and his fringe media outlet InfoWars with platforms and millions of views until banning him amid a wave of criticism last year.

“Today around the world, demagogues appeal to our worst instincts. Conspiracy theories once confined to the fringe are going mainstream.”

“We have lost, it seems, a shared sense of the basic facts upon which democracy depends.”

Sacha acknowledged that the social media companies have attempted to wind back some of the problems with the platforms and implemented policies meant to reduce hate and conspiracies that spread on their platforms. But he described the measures as “mostly superficial”.

“Freedom of speech is not freedom of reach. I think we could all agree that we should not be giving bigots and pedophiles a free platform to amplify their views and target their victims,” he said as part of his speech.

“The Silicon Six – all billionaires, all Americans – who care more about boosting their share price than about protecting democracy.”

“This is ideological imperialism. Six unelected individuals in Silicon Valley imposing their vision on the rest of the world, unaccountable to any government and acting like they’re above the reach of law.”

Sacha urged that the companies be seen as “what they really are… the largest publishers in history.”

“They should follow basic standards and practices that newspapers, magazines and TV news adhere to in their daily reporting.”

A recent documentary on Netflix “The Great Hack” exposed abuses of the Facebook platform by a UK company called ‘Cambridge Analytica’, employed by the 2016 election team for, then, US presidential candidate Donald Trump, and later the promoters of Brexit.

In both cases huge amounts were spent (in the case of the Donald Trump campaign, some $US37 million) to sway small pockets of swinging voters with highly targeted propaganda designed to change people’s vote. Much of the ‘advertising’ has since been proven as untrue, targeting opposition parties and politicians with fake allegations.

The swinging voters’ ‘profiles’ were identified by simple ‘personality profile’ posts, appearing as entertainment or games on the Facebook platform, and then the information mined to identify, as Cambridge Analytica called them, ‘the persuadables’.