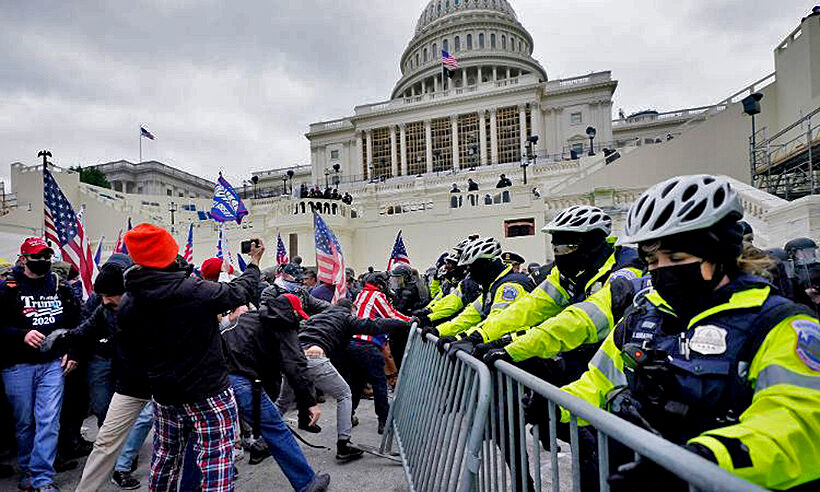 The heart of United States democracy, the US Capitol Building, was stormed by a mob of unruly pro-Trump protesters. Inside, the House of Representatives and the Senate were in the early stages of an unprecedented debate to certify the Electoral College votes that named Joe Biden as the winner of the Presidential vote held on November 3, 2020.

Security quickly cleared the assembled elected members to safe spaces underneath the building whilst some protesters roamed around the building, entering offices, even sitting in the chair of the House Speaker, as the uncontained disruption continued.

Senator Jeff Merkley sent out a Tweet showing the box containing the actual electoral ballots from the Senate floor. Merkley noted that Senate staff “rescued” the ballots before rioters entered the chamber.

“If our capable floor staff hadn’t grabbed them, they would have been burned by the mob.”

People from inside the building described the scenes saying that law enforcement and security “seemed to be outnumbered by the lawless mob”.

Outside, rioters continue to face off with law enforcement, kicking in windows and demanding entry into the building. One woman was shot inside the Capitol by security and has died after being rushed to hospital. A 24 year old man, climbing on scaffolding on the west side of the building, fell more than 10 metres. He was taken to hospital in critical condition.

Earlier in the day, President Trump addressed an orderly MAGA protest, but continued with his narrative of a “stolen election”, inciting the crowd to continue the fight.

As the storming of the Capitol ensued, members of the Republican Party, and President Trump’s leadership group, urged the President to publicly call upon the protesters to stand down. Initially, he remained silent. 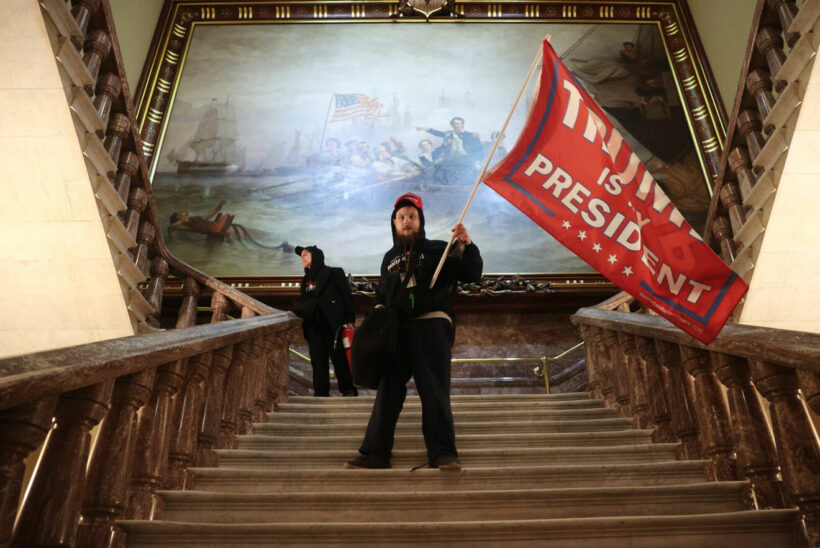 Meanwhile, President Elect Joe Biden made a live appearance calling on the President to “step up”, saying the incident was a “dark moment in the nation’s history.”

“At this hour, our democracy is under unprecedented assault, unlike anything we’ve seen in modern times.”

“Let me be very clear, the scenes of chaos at the Capitol do not reflect the true America.”

“This is not dissent, its disorder, it’s chaos and it borders on sedition and it must end now.”

An hour later President Donald Trump issued a taped video on his Twitter feed, where he again falsely claimed the election “was stolen from us” and that he won it in a “landslide,” but he did call on protesters at the US Capitol building to “go home now.”

He ended the minute-long speech saying to his supporters… “We love you. You’re very special.”

As night fell on the Capitol Building, police moved rioters away from the west entrance shouting, “move back!” Chemical irritants and flash-bangs were used to help dispel the angry mob.

In the wake of the violence police reported that at least 13 people were arrested amid the siege by pro-Trump rioters. The Metropolitan Police Department noted that none of the arrests were of DC resident.

“All were from out of the area.”

The spokesperson said that several officers are being treated for injuries and authorities have confiscated several weapons as riots have unfolded outside the US Capitol. 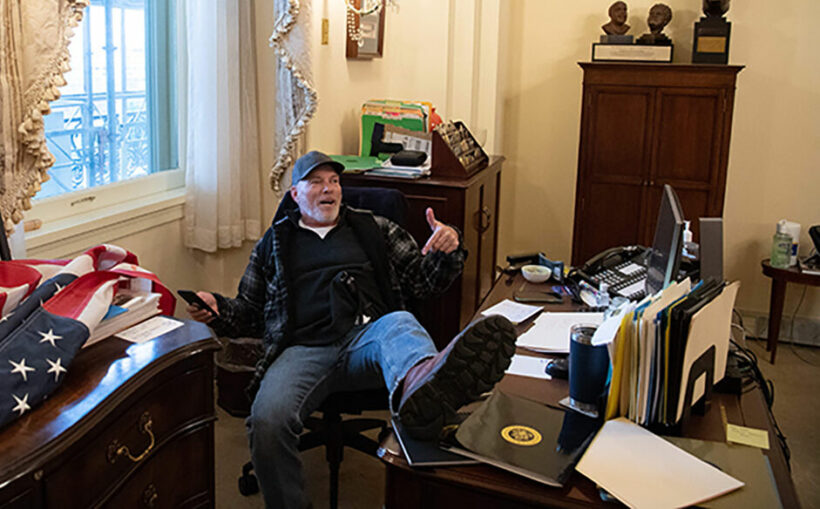 PHOTO: A rioter makes himself at home in one of the member’s offices during the insurgency into the Capitol Building – Getty Images

As the rioters disperse the huddled members are speaking to media and posting on social media their intention to continue the process of validating the Electoral college votes although it is difficult to see that happening any time soon as security will need to fully search lockdown the entire building before proceedings can continue. Later it was revealed that congressional leaders were evacuated from the Capitol complex and taken to Fort McNair, a nearby army base.

Meanwhile, senior Republican members are now urging the 12 dissenting members, who initiated the debate on the Electoral College votes, to pull back from continuing their dissent and the debate, in light of the events that have rocked the citadel of American democracy. 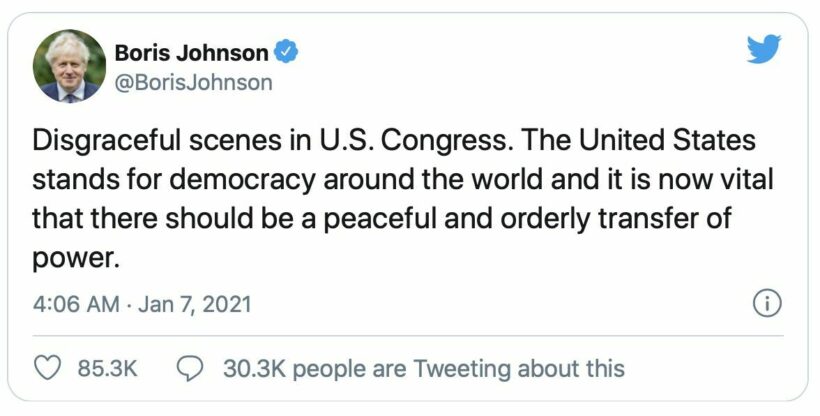 Former US President George W. Bush released a statement condemning the storming of the US Capitol building this afternoon, describing it as “sickening” and “heartbreaking”.

President Trump’s initial homeland security adviser, Tom Bossert, just one of many former officials, has condemned the response to the mob chaos.

“This is beyond wrong and illegal. It’s un-American. The President undermined American democracy baselessly for months. As a result, he’s culpable for this siege, and an utter disgrace.”

Huffington Post’s Igor Bobic photographed one of the mobsters sitting in the House chair. 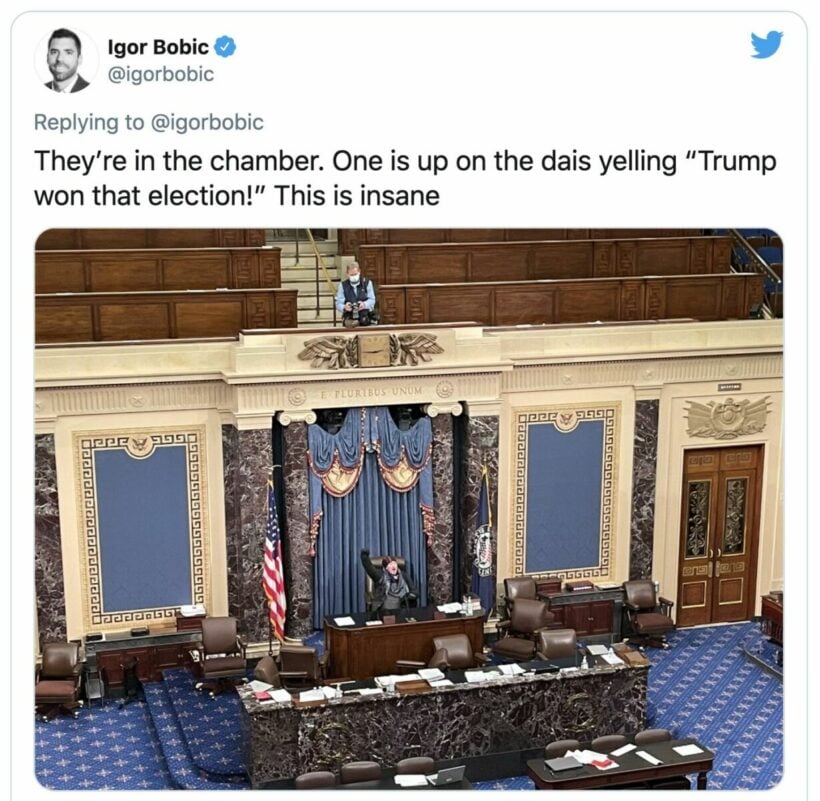 President Trump later defended the actions of the unruly mob who stormed and vandalised the US Capitol.

“These are the things and events that happen when a sacred landslide election victory is so unceremoniously & viciously stripped away.”

There is no doubt the reverberations of this astonishing day in US politics will be remembered forever. 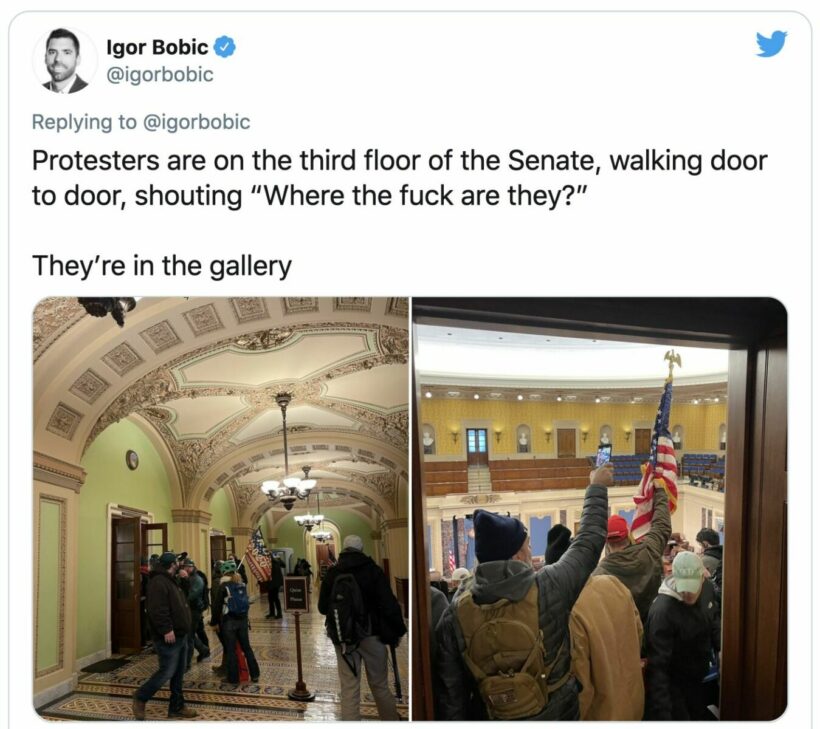