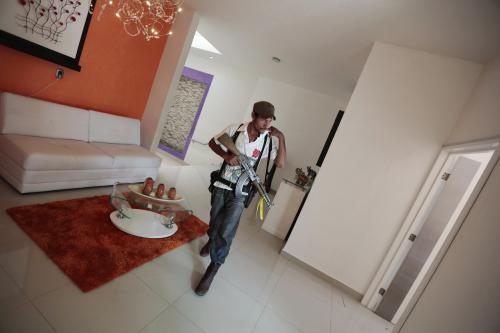 
In lair of Mexico drug boss, vigilantes hold sway
Reuters / Phuket Gazette
PHUKET: His AK-47 tossed onto a pristine leather sofa in the plush lair of a leader of one of Mexico’s most feared drug cartels, vigilante fighter “El Love” says he is longing for an end to a grinding cycle of extortion and murder.

Channel-surfing on a plasma TV abandoned by the drug lord fleeing a revolt by farmers fed up with organized crime, the 43-year-old El Love has taken charge of the property, symbolizing a victory over the Caballeros Templarios, or Knights Templar.

The Knights Templar pose the biggest security challenge yet for President Enrique Pena Nieto, by taking a firm grip on large areas of Michoacan, an impoverished agricultural state which is also home to Mexico’s biggest cargo port.

For now though, heavily armed vigilante groups have struck back, occupying much of the Knights’ heartland with federal forces standing by – raising questions about how the government will restore order in a state that has been lawless for years.

The presence of the vigilantes alongside hundreds of federal police and soldiers is almost as incongruous as the spacious seven bedroom home of the departed Knights Templar leader.

Alongside a grime-laden mechanic’s shop and an abandoned-looking building on a main thoroughfare in the town of Nueva Italia, the lair is hidden behind the facade of a shuttered warehouse filled with cement and building equipment.

Inside, its bedrooms are decked out with a large dressing room, an ante-chamber and flat-screen television.

A swimming pool, bar and fountains are out back. And columns on the terrace are decorated with mirrors that look like disco balls.

“They’re just people who extort and kill, and they live like kings. Just look at this!” El Love said, refusing to give his real name for fear of reprisals from the Knights Templar.

“If they come back, I’ll kill them,” he said. And just in case they do, El Love has 500 rounds of ammunition at hand.

Behind him, a gleaming new kitchen, decorative ornaments and a cluster of checkbooks with stubs detailing payments into thousands of dollars. In the sprawling bedrooms are stacks of empty Louis Vuitton boxes and Chanel and Gucci bags. On a bedside table, there is a box of condoms and a radio scanner.

And in the fridge, a bottle of Moet champagne.

A jacuzzi can be seen through the doorway of a giant dressing room. On one shelf sits a bottle containing a mix of alcohol and marijuana, a traditional remedy for aches and pains in Michoacan.

“They left in a hurry,” El Love said, pointing to goldfish in a shallow water-filled channel along one of the walls.

Fronted by a former schoolteacher, the Knights Templar is a cult-like group that styles itself on the medieval military order that protected Christian pilgrims during the Crusades.

In the home the vigilantes said belonged to one of the gang’s top bosses, a Bible sits on the dining table, and on a shelf is a photo of the late Pope John Paul II.

“We’re going to turn it into a home for kids or something. Just let the narcos try to come back!” said Charlie, a senior vigilante who was badly hurt along with vigilante leader Jose Mireles when a plane crash-landed earlier this month.

The vigilantes say they have amassed weapons and vehicles left behind by the fleeing drug gang members. On Thursday, the vigilantes returned to the original owners the deeds to farm land grabbed by the Knights Templar.

The Knights Templar have defied the government, putting out videos on the Internet and accusing the vigilantes of being infiltrated by other criminal gangs moving into Michoacan.

Vigilantes claiming to number in the thousands, a rag-tag band of lime farmers and others with some military training, crew-cuts and sophisticated weapons, have taken the fight to organized crime and put the Knights on the run.

The vigilantes have fought pitched battles with the Knights in Nueva Italia in recent weeks. Workmen on Thursday filled in walls pock-marked with bullet holes in one neighborhood, where the walls of a school also bore the marks of bullets.

The vigilantes, or “self-defence groups”, have snubbed a government order to stand down and disarm. Instead, they operate openly, manning roadblocks and patrolling unopposed as heavily armed troops and state police drive by, turning a blind eye.

They have cast a spotlight’s glare on Pena Nieto’s security strategy. The president has spent the past year pushing economic reforms aimed at boosting the economy, and seeking to keep the focus off the violence that has claimed over 80,000 lives since 2007.

A convoy of hundreds of federal police and troops on Tuesday moved into the Knights Templar stronghold of Apatzingan, but sporadic attacks have continued.

Gunmen have burned shops and sprayed the state attorney general’s offices with bullets. However, on Thursday, shops reopened under the watch of soldiers and federal police.

After years of raging violence and abortive government attempts to take control, some residents fear a backlash.

“I don’t think things are calm,” said Maria de Jesus Torres Blanco, as she served soft drinks at a stall in the main square in Nueva Italia. “When this lot have gone, there will be reprisals. I think this is a time-bomb waiting to explode.”