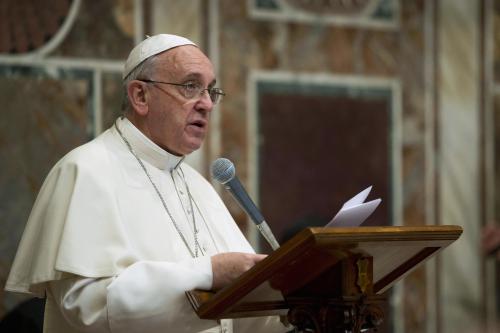 The delegates, answering questions from an international rights panel for the first time since the scandals broke more than two decades ago, denied allegations of a Vatican cover-up and said it had set clear guidelines to protect children from predator priests.

But members of the U.N. Committee on the Rights of the Child, and abuse victims attending the session in Geneva, demanded far more transparency on crimes that have rocked the Church, from the United States to Europe and Australia.

“The best way to prevent abuses is to reveal old ones – openness instead of sweeping offences under the carpet,” Kirsten Sandberg, chairwoman of the 18-strong U.N. committee, told the Vatican delegation.

“It seems to date your procedures are not very transparent.”

Sandberg repeatedly pressed the officials to open up Vatican archives on cases of sexual abuse and pay compensation to young people raped or sodomised by priests.

“We will take your questions seriously but we are not in a position to answer now,” Vatican delegation head Archbishop Silvano Tomasi told her at the end of the day-long session.

The Vatican angered victim support groups last month by refusing to answer the committee’s written questions in advance, saying its inquiries were confidential and that responsibility for dealing with abusers lay with local bishops.

Barbara Blaine, president of the U.S.-based Survivors Network of Those Abused by Priests (SNAP), said the Vatican response fell far short of what victims wanted.

“What we want to see is the Vatican punish bishops who covered up sex crimes, and we want them to turn over information they have about crimes to police,” she said.

“The Vatican attempted to relegate the issue to the past and claim it is a new era,” said Pam Spees, an attorney for the U.S.-based Center for Constitutional Rights.

Holy See ‘gets it’

Victims accuse bishops of covering up crimes and switching priests to other parishes to avoid prosecution. Courts have ordered dioceses to pay hundreds of millions of dollars in damages, bankrupting a string of them in the United States.

Pope Francis told worshippers at morning Mass in the Vatican on Thursday that abuse scandals had “cost us a lot of money, but (paying damages) is only right.” He said bishops, priests and lay people were responsible for this “shame of the Church”.

On December 5, Francis ordered the formation of a team of experts to look into the sexual abuse of minors in the Church, in his first major step to tackle the issue.

Vatican officials long played down the abuse scandal as a limited problem, but shocking revelations in the United States, Ireland and then several European countries have turned it into a crisis in recent years. Francis’ predecessor Pope Benedict publicly apologised for the crimes committed by priests.

“The Holy See gets it, let’s not say too late… There are certainly things that need to be done differently,” said Archbishop Charles Scicluna of Malta, the former top Vatican official for abuse cases.

“It is not the policy of the Holy See to encourage cover-ups. Only the truth will help us move on to a situation where we can start being an example of best practice.”

Committee expert Sara De Jesus Oviedo Fierro told Tomasi and Scicluna that the Holy See had “not established any mechanism to investigate perpetrators of sexual abuse and to prosecute them.”

At the debate’s end, she said the committee had “great expectations that new steps will be taken, that dialogue with civil society will happen, this will become a reality. This will attest to this new era, this new dawn for the Holy See.”

But Miguel Hurtado, a Spaniard sexually molested by his parish priest, voiced disappointment at the Vatican’s statements after attending the day-long session.

“Transparency is a very powerful tool when you are doing the right thing. When you have something to hide, you hide behind words and are not forthcoming with facts and details because facts and details are not on your side,” he told Reuters TV.