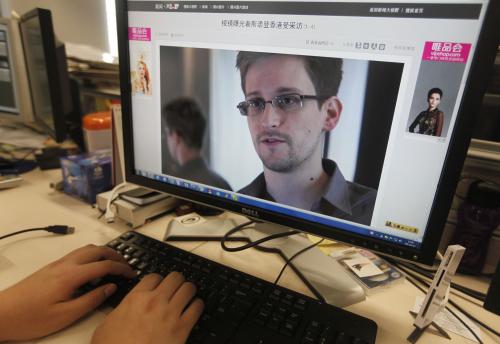 Code-named “Dishfire,” the NSA program collects “pretty much everything it can,” the Guardian said, citing a joint investigation with the UK’s Channel 4 News based on material from fugitive former NSA contractor Edward Snowden.

The newspaper said the documents also showed that the British spy agency GCHQ had used the NSA database to search the metadata of “untargeted and unwarranted” communications of people in the United Kingdom.

It added that communications from U.S. phone numbers were removed or “minimized” from the database, while numbers from other countries, including the UK, were kept.

Citing a 2011 NSA presentation subtitled “SMS Text Messages: A Goldmine to Exploit,” the Guardian said the program collected 194 million text messages a day on average in April that year.

“The NSA has made extensive use of its vast text message database to extract information on people’s travel plans, contact books, financial transactions and more – including of individuals under no suspicion of illegal activity,” the Guardian report said.

U.S. President Barack Obama is scheduled to announce reforms on Friday to NSA eavesdropping programs, prompted by disclosures from Snowden.

Questions about U.S. government spying on civilians and foreign officials burst into the open in June when Snowden leaked secrets about mass collection of telephone data and other secret eavesdropping programs to newspapers before fleeing to Hong Kong and then to Moscow.

Asked about the Guardian article, the NSA said, “As we have previously stated, the implication that NSA’s collection is arbitrary and unconstrained is false.”

The agency’s activities “are focused and specifically deployed against – and only against – valid foreign intelligence targets in response to intelligence requirements,” the NSA said in a statement, adding that Dishfire processed and lawfully stored collected text-message, or SMS data.

“Because some SMS data of U.S. persons may at times be incidentally collected in NSA’s lawful foreign intelligence mission, privacy protections for U.S. persons exist across the entire process concerning the use, handling, retention, and dissemination of SMS data in DISHFIRE,” the agency said.

“In addition, NSA actively works to remove extraneous data, to include that of innocent foreign citizens, as early as possible in the process,” it said.

Phuket Gazette World News: World may have to suck gases from air to meet climate goals