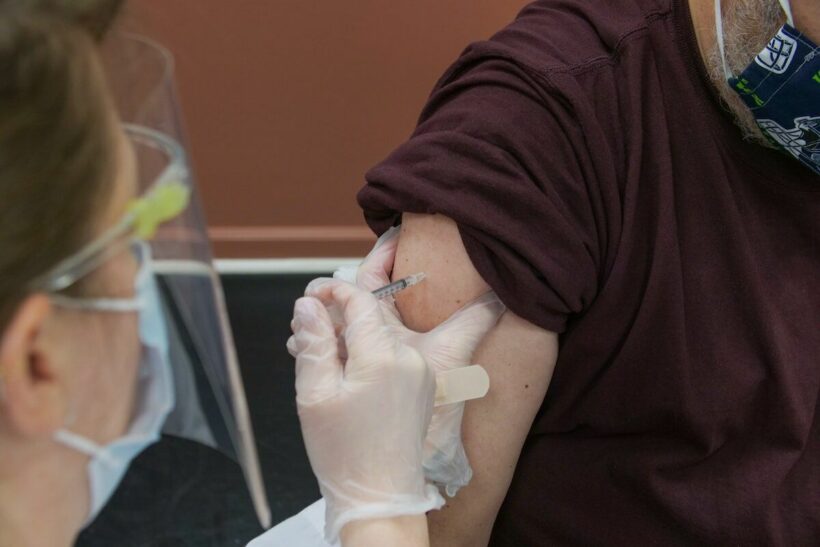 A man getting a vaccination. | Photo: Steven Cornfield (unsplash.com).

New Zealanders are currently unable to return home as the Covid-19 response minister Chris Hipkins orders a temporary halt to the only route back to the country due to the fully occupied numbers of managed isolation and quarantine, or MIQ, as demands soar following the threat posed by the Omicron strain yesterday.

Although the ban would be temporary, no date had been set for when slots would be available again, implying that New Zealand’s border would be blocked to citizens and visa holders without a reservation for an indefinite period of time, according to the minister.

“Pausing the next MIQ lobby is a temporary position while MIQ is under extreme pressure from New Zealanders returning with Omicron”.

He added that no MIQ rooms will be available to offer until the cabinet can evaluate options in the coming weeks with the most up-to-date information to decide whether the reopening date of the border should be set or in what condition.

A record number of Omicron cases are emerging in New Zealand and MIQ, with a tenfold rise in cases at the border compared to last month and the last seven days, as a household member of a MIQ worker was considered one of the cases, whilst an airport employee tested positive separately yesterday.

New Zealand’s rigorous border controls have been critical in preventing an Omicron outbreak and other Covid-19 instances to an absolute minimum, but they are also causing rising pain and upsetting those who have been barred out, often in dire personal circumstances, as MIQ rooms are released via a lottery method and there is considerable competition for them.

In early January’s release, there was a line of 16,000 individuals waiting to secure one of the 1,250 vacant rooms, as the only way to enter New Zealand is to secure a spot in MIQ, unless you want to take the risky route of chartering a boat over the Tasman.

Thanks to Omicron, the previous announcement by the government on the reopening of the border for vaccinated travellers in mid-February has been put back and no new date has been set for when border restrictions will be eased.

PM Jacinda Ardern also intends to boost vaccination rates as much as possible during the border closure, with a focus on increasing booster rates and immunising as many kids between 5 to 11 years old as possible.

80% of New Zealand’s population has received at least one treatment, with 78% having received all three doses.

Cabra
To bad for non citizens. Citizens can still get home through managed isolation.
Lawyers_Guns_and_Money
21 hours ago, Thaiger said: New Zealanders are currently unable to return home as the Covid-19 response minister Chris Hipkins orders a temporary halt to the only route back to the country due to the fully occupied numbers of managed…