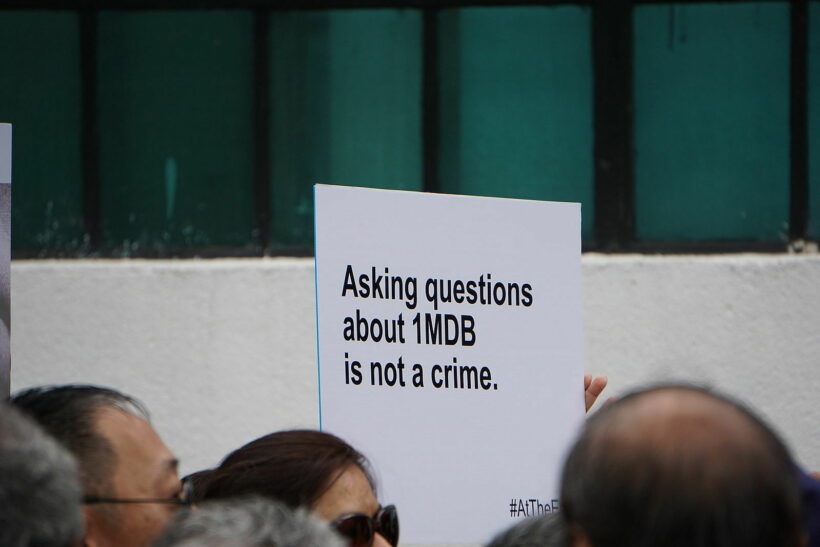 A placard at Malaysian journalists' protest against suspension of The Edge Financial and for media freedom in Malaysia, August, 2015. Credit: Khairil Yusof | Wikimedia

An ex-Goldman Sachs banker testified in federal court on Wednesday that greed and ambition motivated his participation in a massive bribery scheme that stole billions of dollars from the Malaysian sovereign wealth fund 1MDB.

The former chief of Goldman’s Southeast Asia operation — Tim Leissner — is the high profile witness in the criminal trial of Roger Ng, former head of investment banking in Malaysia.

The trial began in federal court on Monday in Brooklyn, New York.

Roger Ng is accused of receiving millions of dollars in kickbacks for his involvement in embezzling funds from 1MDB and for helping to form a relationship with the Malaysian finances Jho Low, who was the main mediator between 1MDB and the bank.

However, Ng’s lawyer on Wednesday asserted that Ng did not play a role in the embezzlement scheme allegedly committed by Low and Leissner.

Leissner said in 2012 that those who would need to be bribed included the then Malaysian Prime Minister Datuk Seri Nab Razak.

Malaysian authorities accuse the former PM of having received more than US$1 billion linked to the fund.

Razak, who was voted out of office in 2018, has denied wrongdoing and appealed a 12-year prison sentence.

Meanwhile, Ng has pleaded not guilty in conspiring to violate an anti-bribery law and engage in money laundering.

In a 2018 trial, Leissner pleaded guilty to similar charges and agreed to cooperate with the government’s ongoing criminal investigation.

He said that his greed and ambition took over, but that the consequences of his actions had destroyed his life.

In 2020, the bank paid a massive fine of nearly US$3 billion and made arrangements for its Malaysian branch to plead guilty in US court.

Grumpish
Greed and ambition in the investment banking world, now there is a surprise.
Marc26
This is the book about it It's really good https://www.amazon.com/Billion-Dollar-Whale-Fooled-Hollywood/dp/031643650X
oldschooler
11 hours ago, Marc26 said: I don't know where you are from, but in the 70's that would have sufficed..........definitely not today. And yes, people could work their way up back then (I got offered a job in the mailroom…
butterfly
the story behind 1MDB is quite incredible, and they should make a movie about it ironically, some of the money from 1MDB was used to produce the Wolf of Wallst with DiCaprio a lot of smart criminals in Malaysia and…
Marc26
14 hours ago, oldschooler said: Grammar school Wimbledon. Kingston college part time whilst working as Management Trainee in Contracts & Procurement. Immature at 18 and not fast enough thinker for trading but back room sure. GS Mail Room ! Peer…