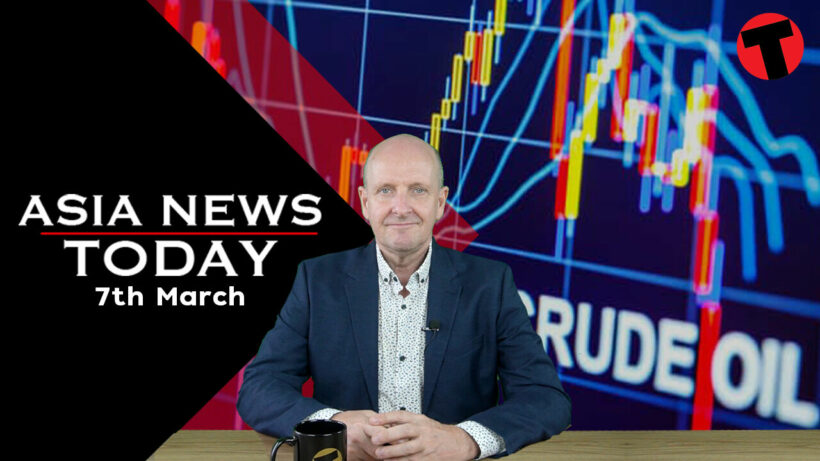 Shares in Asia-Pacific have declined in today’s trade as oil prices continue to surge, with the ongoing Russia-Ukraine war continuing to weigh heavily on investor sentiment. The Hang Seng led losses across the region, dropping more than 4% at one point before a small bounce back. Shares of HSBC plummeted 6%. China’s Shanghai composite shed 1.42% and the Shenzhen composite slipped just over 2.5%. In Japan, the Nikkei 225 also saw heavy losses tumbling a tad over 3%… some tech shares dropping over 7% today.South Korea’s Kospi fell 2.3%. The Australian ASX 200 dipped nearly 1 full %. The international benchmark Brent crude futures are up 8.6% to US$128 per barrel…. That down from an earlier high of US$139.13 per barrel … the highest since July 2008.

Japan’s Foreign Ministry has adjusted its travel advisory for Russia, urging residents not to travel to Russia at this time. The ministry raised the risk warning to Level 3. Last week, the foreign ministry was urging Japanese nationals anywhere near the Ukranian borders or in Ukraine to evacuate. The Japanese ministry is urging Japanese nationals to consider leaving Russia on commercial flights while they can. As of today, the ministry says about 2,400 Japanese were registered with its diplomatic missions as still resident in Russia.

Around 114 Rohingya Muslims have been discovered on a beach near a fishing village at the far north of Sumatra island in Indonesia’s province of Aceh. Officials say they have spent weeks at sea.Villagers helped bring the rickety wooden boat to shore and then reported their arrival to authorities. The head villager said the refugees looked very weak from hunger and dehydration after a long and severe voyage at sea. There were 58 men, 21 women and 35 children who were given shelter in the village.More than 700,000 Rohingya Muslims have fled from Buddhist-majority Myanmar to camps in Bangladesh since August 2017, after atrocities inflicted by the Burmese military. Myanmar’s security forces have been accused of mass rapes, killings and the burning of thousands of homes. Other groups of Rohingya have attempted to cross into Thailand or travel by sea in hazardous voyages to other Muslim-majority countries in the region.

Indonesia and Malaysia have had some of Asia’s strictest entry procedures in reaction to the Covid-19 surges sweeping through the region. But Indonesia is now considering a quarantine waiver for foreign visitors to Bali from next week. Meanwhile neighbour Malaysia has announced the removal of restrictions on travellers from Thailand and Cambodia from March 15.For Indonesia, the President Widodo Joko will make a final decision today.If it happens, visitors from 23 countries, including Australia, the US, Germany, and Netherlands, would qualify for a visa on arrival under revised rules.Malaysia will allow vaccinated arrivals from Cambodia and Thailand to skip quarantine from March 15. Flights and a final list of arrival details are still being hammered out at this time.Malaysia has already waived quarantine for arrivals from Singapore. The Philippines, Vietnam and Thailand have already reopened their borders with varying levels of arrival procedures.

A US federal judge has convicted a man in the state of Alabama to 160 years of prison for soliciting videos of Filipino children being sexually abused. A federal jury convicted Benjamin Walter in October last year of “four counts of producing and attempting to produce child pornography, receiving and distributing child pornography.”For three years, Walter sought women in the Philippines to sexually abuse their children and other relatives, including arranging for gang rape of young children. He would then send money for the videos, images and live transmissions. The Philippine Justice Undersecretary has hailed the conviction of Walter not just as a win for his victims but for other victims of sexual abuse and exploitation. She stressed that online sexual exploitation of children preys on the most vulnerable and leaves them scarred for life. In 2020, the Commission on Human Rights also said that the pandemic and its effect on the livelihoods of people rendered many Filipinos more vulnerable to exploitation.

The director of the Russian Singapore Amateur Chekhov Theatre has complained that in recent weeks she is experiencing anti-Russian sentiment. She says that people have been sending offensive memes and hate speech directed at her and Russians generally, making her fear for her safety in Singapore. No other members of the Russian community in Singapore are reporting varying degrees of hostility, particularly online, since the Russian invasion of Ukraine started on February 24. There are about 4,000 Russians living in Singapore. Many other say they are bracing for more online problems. Meanwhile the Russian Embassy in Singapore has not registered any official reports about mistreatment or discrimination of its citizens. He noted…. At the same time, we regret to note that the anti-Russian campaign launched in the Western media, which is actively reprinted here in Singapore, cannot but warm up Russophobic sentiments in the society.

Meanwhile, in Phuket, Russian travellers who have found themselves stranded on the southern Thai holiday island, have been granted an automatic visa extension of at least 1 month, as long as they can present an official letter from their Consulate listing the reasons they are unable to return to Russia. One of Phuket’s main feeder markets over the last four months have been Russians escaping the cold. Thai immigration say they recognise that there has only been limited flights into Thailand since the Russian invasion of Ukraine and that many of the travellers have reported problems with accessing money from Thai banks and ATMs.