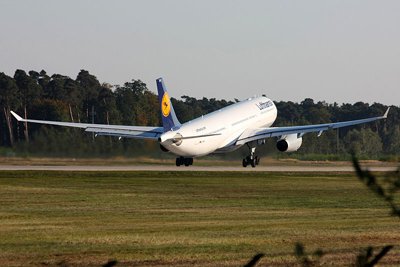 “Lufthansa sincerely regrets that the labor dispute is being waged at the expense of its customers,” an airline spokesperson said in a statement. “The fact that the UFO announces strike actions only at short notice creates additional problems for passengers because it will further limit their ability to make reliable travel plans.”

This morning the Lufthansa website showed 197 national and internationals flights had been canceled due to the strike.

“The call to strike action forces Lufthansa to cancel a majority of its flights. Unscheduled cancellations and delays of Lufthansa flights must be anticipated,” the airline said, adding that irregularities in flight operations are likely to continue after the end of the strike.

Cabin crews based in New Delhi and Bangkok are not participating in the strike, which Lufthansa said should not affect the operations of Lufthansa Regional and Germanwings.

“Lufthansa regrets any inconvenience to its passengers caused by the strike measures and will do its utmost best to minimize the impacts,” the airline said.

Lufthansa does not offer a direct service to Phuket, However, the company has a code share agreement with THAI Airways International for passengers wishing to travel to the island.

Passengers whose flights are canceled or delayed are asked to visit the airline’s website for more information. Lufthansa said passengers on affected German domestic flights may exchange their e-ticket for a travel voucher and alternatively travel by train with Deutsche Bahn. International passengers will be able to check in on an alternative flight or rebook free of charge – or receive a refund.

Last week’s strike, which only affected flights at Frankfurt Airport, was called after Lufthansa’s management failed to reach an agreement with UFO over a pay increase, working conditions, and the use of temporary cabin crews. UFO represents two-thirds of the airline’s 18,000 cabin crew and demands a 5 percent pay increase, but Lufthansa has only offered a 3.5 percent increase.