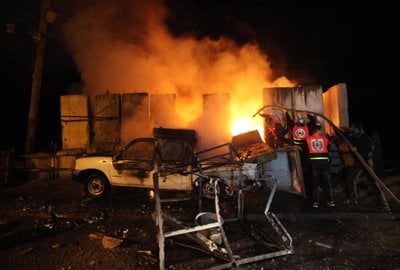 
Egypt PM to visit Gaza in support of Hamas against Israel
Reuters / Phuket Gazette
PHUKET: Egypt’s prime minister prepared to visit the Gaza Strip today in an unprecedented display of solidarity with Hamas militants embroiled in a new escalation of conflict with Israel that risks spiraling into all-out war.

Two rockets from Gaza crashed near Tel Aviv in the first such attack on Israel’s commercial capital in 20 years. One fell into the Mediterranean Sea and the other in an uninhabited part of one of the Tel Aviv suburbs south of the city.

Two days of Israeli air strikes have killed 19 Palestinians, including seven militants and 12 civilians, among them six children and a pregnant woman. A Hamas rocket killed three Israelis in the town of Kiryat Malachi yesterday morning.

The latest upsurge in the long-running conflict came on Wednesday when Israel killed Hamas’ military mastermind, Ahmed Al-Jaabari, in a precision air strike on his car. Israel then began shelling the coastal enclave from land, air and sea.

Israel says its offensive responded to increasing missile salvos from Gaza. Its bombing has not yet reached the saturation level seen before it last invaded Gaza in 2008, but Israeli officials have said a ground assault remains possible.

The Gaza conflagration has stoked the flames of a Middle East ablaze with two years of Arab popular revolution and a civil war in Syria that threatens to spread further afield.

Israeli warplanes bombed targets in and around Gaza City, rattling tall buildings. In a hint of escalation, the spokesman for Israel’s military said it had received the green light to call in up to 30,000 reserve troops.

Egypt’s new Islamist President, Mohamed Mursi, viewed by Hamas as a protector, led a chorus of denunciation of the Israeli strikes by allies of the Palestinians.

Mursi’s prime minister, Hisham Kandil, is to visit Gaza today with other Egyptian officials in a show of support for the enclave, an Egyptian cabinet official said. Israel promised the delegation would come to no harm.

An Egyptian government source, speaking on condition of anonymity, said officials accompanying Kandil would explore the possibility of brokering a ceasefire.

Mursi faces domestic pressure to act tough. But Egypt gets $1.3 billion a year in U.S. military aid and looks to Washington for help with its ailing economy, constraining Mursi despite his need to show Egyptians that his policies differ from those of his U.S.-backed predecessor Hosni Mubarak.

Tel Aviv targeted
Air raid sirens sent residents running for shelter in Tel Aviv, a Mediterranean city that has not been hit by a rocket since the 1991 Gulf War, when it was targeted by Saddam Hussein’s Iraq.

The Tel Aviv metropolitan area is home to more than 3 million people, more than 40 percent of Israel’s population. “This escalation will exact a price that the other side will have to pay,” Barak said in a television broadcast shortly after the strike.

But an Israeli cabinet statement on Wednesday spoke only of “improving” national security – acknowledgement that the Jewish state has no illusions about crushing the militants once and for all.

Speaking at the same time in Gaza, Hamas leader Ismail Haniyeh urged Egypt to do more to help the Palestinians.

“We call upon the brothers in Egypt to take the measures that will deter this enemy,” the Hamas prime minister said.

The resurgent conflict will be the biggest test yet of Mursi’s commitment to Egypt’s 1979 peace treaty with Israel, which the West views as the bedrock of Middle East peace.

Cairo recalled its ambassador from Israel on Wednesday. Israel’s ambassador left Cairo on what was called a routine home visit; Israel said its embassy would remain open.

The Muslim Brotherhood, which brought Mursi to power in an election after the downfall of Hosni Mubarak, has called for a “Day of Rage” in Arab capitals on Friday. The Brotherhood is seen as the spiritual mentor of Hamas.

The Israeli army said 300 targets were hit in Gaza, including more than 130 militant rocket launchers. It said more than 270 rockets had struck Israel since the start of the operation, with its Iron Dome interceptor system shooting down more than 130 rockets bound for residential areas.

Expecting days or more of fighting and almost inevitable civilian casualties, Israeli warplanes dropped leaflets in Gaza advising residents to stay away from Hamas and other militants.

Diplomatic efforts
United Nations diplomats said Secretary General Ban Ki-moon would head to Israel and Egypt next week to try to mediate a ceasefire, although they gave no further details.

The United States has asked countries that have contact with Hamas to urge the Islamist movement to stop its recent rocket attacks from Gaza, a White House adviser said.

“We’ve … urged those that have a degree of influence with Hamas, such as Turkey and Egypt and some of our European partners, to use that influence to urge Hamas to de-escalate,” Ben Rhodes, deputy national security adviser, said in a conference call with reporters.

Lebanon’s Iranian-backed Shi’ite Muslim militia Hezbollah, which has its own rockets aimed at the Jewish state, denounced strikes on Gaza as “criminal aggression,” but held its fire.