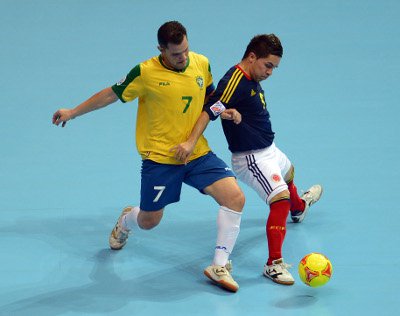 PHUKET: The stage is set for another epic FIFA Futsal World Cup final between the world’s top two national teams – Spain and Brazil – with the seventh edition of the prestigious tournament to conclude tonight in Bangkok.

In what is expected to be a high intensity clash, the ‘coffee growers’ will try to maintain their shock and surprise streak that saw them knock out heavily favored Iran and Ukraine.

At the start of the tournament, Colombia was ranked 19th in the world, but thanks to a strong campaign, have since shot up to number 12.

World number 3, Italy look to repeat their 3rd place finish from four years ago when they prevailed over Russia 2-1.

Tonight’s main event will be battled out between the world’s respective number one and two sides.

Indeed, Spain and Brazil are the only two to have ever been crowned champions of the official futsal world championship since its debut in 1989.

Four years ago, hosts Brazil were crowned champions when they edged Spain in a 4-3 penalty shootout to settle a 2-2 deadlock after extra time.

Before that, Spain had beat Brazil 4-3 in 2000 in Guatemala, while Brazil prevailed 6-4 four years prior to that when the tournament was hosted in Spain.

As defending champions and current world number 2, Brazil will look to gain their fifth title after defeating Colombia 3-1 in the semifinals on Friday night.

Meanwhile, world number 1, Spain, who had downed Italy 4-1 in their respective semifinal, will seek their third title.

Both of tonight’s matches will be played at Bangkok’s Indoor Stadium, Huamark. Though tickets are sold out, the matches will be broadcast live on Thai terrestrial TV channel 9.

Also, the matches can be streamed live on this link.

Kickoff times (GMT+7) are as follows:

PHOTO: Hotels and other tourism business are hoping the July 1st reopening goal can still be achieved.

A hotel information blog is claiming that, despite growing Covid-19 numbers, Phuket should stick to its schedule in reopening to travellers without quarantine in July. That’s only 2 and a half months away.

In an interview with the Director of Travel and Tourism Consulting at GlobalData, they stressed that while it is crucial to rein in the spread of Covid-19 and the B117 strain now menacing Thailand, the risk must not overshadow the need to push forward with vaccinations and the march towards eliminating the quarantine by July in order to save the tourism industry and all those dependent on it.

“The Phuket pilot program is essential in creating a path towards economic recovery for Thailand, a country heavily dependent on tourism. More than 17% of Thailand’s gross domestic product is attributed to tourism and the Covid-19 pandemic has lead to the worst economic free-fall in over 20 years”

The blog acknowledges the inherent risk and possible appearance of foolishness to prioritise the plans to reopen and carry on with the same rollout schedule. But they urge Thai authorities to consider that July 1 is still 2 and a half months away, leaving ample time to recover and make progress towards the approaching Phuket reopening. A vital aspect of the reopening plan lies in vaccinating over 70% of Phuket’s provincial residents, a sizable task, but one that brings great benefit with or without the scheduled reopening.

“Pushing ahead to achieve this goal puts Phuket on track to welcome back tourists, perhaps in a “bio-bubble”, and restart the economy. The economy is desperate with household debt growing, pushing the government to enact emergency decrees to provide relief. These households need the return of tourism and the influx of cash international tourists will bring.”

The blog hopes that Thai authorities can balance the necessary Covid-19 safety measures in Phuket to protect the Thai population with the economic need to bring back tourism. They believe that with sufficient measures in place, vaccinated locals could welcome vaccinated international tourists back to Phuket reopening safely in July.

UPDATE: The field hospital in Bangkok’s Bang Bon district, west of the Chao Phraya river, had its first 10 Covid patients today. The director of the medical services office of the Bangkok Metropolitan Administration says that the 10 patients into the makeshift hospital, located at the Chalerm Phra Kiat Stadium, will enable assessment of the performance by the medical team, before more patients arrive – Thai PBS World

ORIGINAL STORY: Despite the confident posture and Songkran going ahead, amid restrictions, there is a lot of background activity which suggest the authorities are getting ready for a surge of new infections at the end of the Songkran break, officially this Thursday (but in reality, next Sunday at the end of the weekend when most people who travelled home will return for a resumption of work).

The Thai lunar new year celebrations – Songkran – are the largest mass movement of Thais each year, a source for a huge leap in road deaths and accidents. And, this year, a potential super-spreader event.

Quietly, at least 3,000 extra beds have been prepared in 10 field hospitals around Bangkok. The government has also confirmed that additional field hospitals are being set up in other potential ‘hot zones’, including Phuket, Chiang Mai, Chonburi and Hua Hin. Some of them were set up last year, and since closed, and now being prepared for new positive infections.

One Thai person who had been in one of the field hospitals put together a check-list of things to take IF you end up as an invited ‘guest’ HERE.

The CCSA say they are looking for additional beds in hotels and previous state quarantine facilities (where repatriating Thais were housed for their free quarantine) to be used if needed.

This year’s Songkran had bad timing, coming just a week after a number of major clusters were identified around some of Bangkok’s popular nightlife areas in 3 key inner city districts. Even before Songkran these isolated clusters had already spread into the provinces. In the weekend before Songkran the government had already listed 37 provinces which had instigated some form of paperwork or restrictions for people who had been in any of the 3 Bangkok districts.

The government also leapt on the source of the new outbreaks – bars, clubs and entertainment venues – and promptly shut them down for at least 2 weeks. At this stage it looks likely that that ban will be extended beyond the 2 weeks and, depending on the extent of new infections following the Songkran holiday, additional restrictions will also be added.

Even today the Civil Aviation Authority published a number of new in-flight restrictions for passengers – another blow to the hard-hit domestic aviation sector.