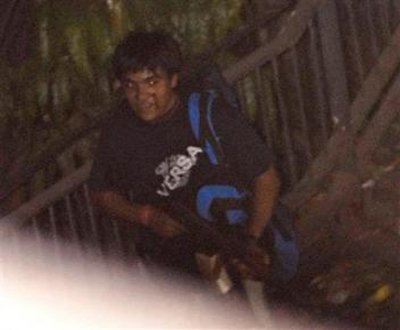 
In great secrecy, India executes last surviving Mumbai attacker
Reuters / Phuket Gazette
PHUKET: India executed Mohammad Ajmal Kasab, the lone survivor of a militant squad that killed 166 people in a rampage through the financial capital Mumbai in 2008, hanging him today just days before the fourth anniversary of the attack.

Kasab, a Pakistan national, was the enduring image of the bloody assault, which traumatized India and raised fears of copycat attacks on foreign cities. Pictures of the young gunman wearing a black T-shirt and toting an AK-47 rifle as he strode through Mumbai’s train station were published around the world.

The hanging took place early this morning amid great secrecy, underscoring the political sensitivity of the November 26, 2008, massacre, which still casts a pall over relations between nuclear-armed rivals Pakistan and India.

He was buried inside the prison where he was hanged, officials said. India said it would hand over the body to Pakistan if a request was made.

“All the police officers and personnel who lost their life in the battle against the terrorists have today been served justice,” Home Minister Sushil Kumar Shinde said shortly after Kasab was hanged in a jail in Pune, southeast of Mumbai.

It was the first time a capital sentence had been carried out in India since 2004. There was relief on the streets of Mumbai as news of the execution swiftly spread.

“When I heard the news of Kasab’s execution today, I remembered those horrifying moments of the attack. My eyes were filled with tears,” said Vishnu Zende, who was working at Mumbai’s train station on the day of the attack.

In August, India’s Supreme Court upheld Kasab’s 2010 death sentence over the attacks on a string of targets. Nearly 60 people were gunned down in the train station alone. President Pranab Mukherjee rejected his plea for clemency on November 5, although this was not made public until yesterday.

“Foot solider”
Ten militants arrived on the Mumbai shoreline in a dinghy on November 26, 2008, before splitting into four groups and embarking on a killing spree. They held off elite commandos for up to 60 hours in two luxury hotels and a Jewish center in the city.

India accuses Pakistan-based Lashkar-e-Taiba (LeT) of organizing the attacks and says Islamabad is failing to act against those behind the raids. Pakistan denies involvement and says it is prosecuting seven suspected militants for their role.

“Kasab was a foot soldier, the generals are in Islamabad, in Pakistan, and full justice will be done when they are brought to justice,” Gopalapuram Parthasarathy, a former ambassador to Pakistan, told Reuters.

India and Pakistan’s relations have gradually improved since the attacks, with progress made on trade and economic ties.

Possibly because of the planned execution, India yesterday asked Pakistan to postpone a visit this week by its Interior Minister Rehman Malik, saying the dates were “not suitable for us”. Malik was due to put the final seal on a deal to ease visa restriction for travellers.

Islamabad was informed beforehand about Kasab’s execution, said a Pakistani foreign ministry official who asked not to be identified.

“If all judicial procedures were followed then the decision is acceptable,” the official said.

Raju Ramachandran, one of Kasab’s lawyers, said Kasab was a worried man when he last met him before the death sentence was upheld by the Supreme Court. He was scared that he would be hanged and asked the lawyer, “Can you please help me get out of jail?”