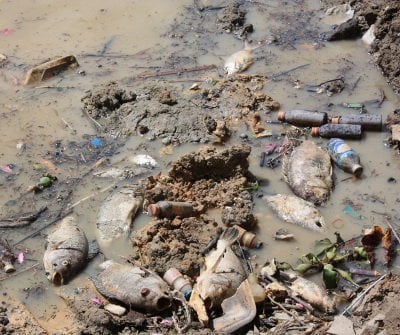 PHUKET: Dredging of a popular fishing pond in Suan Luang (Rama IX Park)* in Phuket Town is on hold after hundreds of fish were found dead along the banks of the pond this morning.

Local residents believe the fish died from oxygen depletion in the water brought on by dredging. The dredging is part of a 25-million-baht flood-prevention project.

Residents raised the alarm early today after they arrived at the pond to find dead fish, some weighing more than a kilogram, strewn along the banks and floating in the water.

“The pond had a lot of fish because many people came here to release fish as a way of making merit,” one local resident explained to the Phuket Gazette.

“We noticed fish dying after the dredging began a few days ago, but today was the first time we have seen so many dead fish floating on the water’s surface,” he added.

Ruthai Patcharanurak, who took up the position of chief of the Royal Irrigation Department Phuket office just yesterday, inspected the scene.

“I have ordered workers to stop dredging. I will contact the Phuket Provincial Fisheries Office and Phuket City Municipality to sort out the problem,” Mr Ruthai said.

“The dredging was part of a 25mn-baht project to increase the capacity of the two ponds, one at Phuket Rajabhat University and this one here at Suan Luang Park, in order to prevent flooding in Phuket Town,” he explained.

Phuket City Municipality officers collected the dead fish and sent them to be destroyed.

This afternoon, other municipal officers were patrolling the perimeter of the pond to ensure no local residents attempted to catch fish at the pond.

* Correction: The original report named the park as Queen Sirikit Park, not Suan Luang Park. The error is regretted.

Tourists rushed to Phuket after ‘near drowning’ during snorkelling day trip