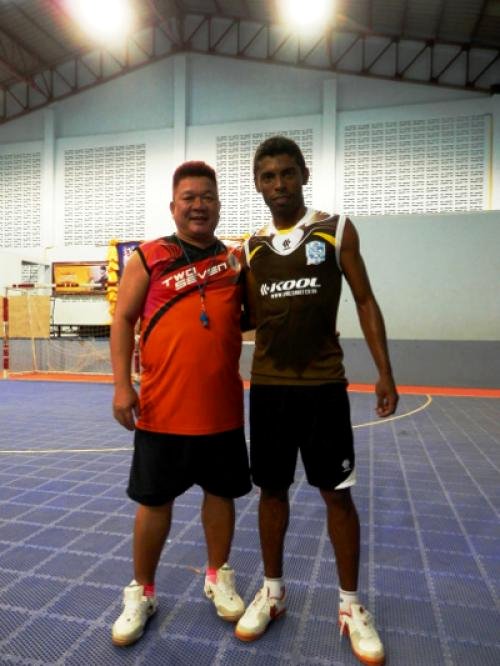 PHUKET: Phuket United’s home at the new 4,000-seat futsal arena in Saphan Hin is under threat after Phuket City Municipality has asked that the parquet playing surface be relayed with rubber.

The Andaman Pearl’s Saturday game was postponed to Sunday, at Fashion Island in Bangkok, because of issues with the playing surface at Saphan Hin’s futsal stadium, said Samak Rattanadilokna, director of Phuket United.

“Phuket City Municipality will not let us play futsal matches until we can find rubber to cover the parquet floor. So now we are waiting for the rubber to be transferred from the Sports Authority of Thailand (SAT). The new rubber will cover the futsal pitch of the 4,000-seat indoor sports complex in Saphan Hin.”

Mr Samak added that although Phuket United had the opportunity to play at a nice stadium in Bangkok they had chosen to remain here for the fans.

“If we want to make everything much easier we could play all of our games at the central futsal pitch at Fashion Island in Bangkok. To rent the field in Bangkok is about half as expensive, 20,000 baht for one match, compared with 43,000 baht to play at the stadium in Saphan Hin. But I would like the people of Phuket to see our futsal team, which consists of local young people. This will encourage children to take an interest in the sport.”

Team manager Chalermpol Gerdsub, who is now in Chiang Mai to coordinate with SAT to rent the rubber for the pitch in Phuket, told the Gazette:

“The match on December 15 was postponed because of problems with the pitch at Saphan Hin. The match with Nonthaburi will still be held on the 19th at Fashion Island. However, we are not sure yet about the match on 26th. We are currently waiting for a response from SAT to see if they will rent us the rubber”

Chalermpol was upbeat about his team’s chances on the pitch after a confident 3-1 victory over Prachin this week.

“All of the players on our team are in good spirits and they are already 80 per cent fit. We have a new player from Brazil on loan, Jardel, who is a friend of our two current Brazilian players.”

The game remained scoreless until a corner from Rogerio Moreira was turned in by Aukadaj Chuiklai in the 14th minute.

Jackson Santos scored Phuket United’s second goal in the 20th minute. Prachin Futsul Club pulled a goal back in the 22nd minute with Nattawut Luksanato but it was no consolation as a goal from Nattaphong Buachai ensured that Phuket United won 3-1.

Phuket United won their second match in a row on Sunday, at Fashion Island in Bangkok, beating Samut Songkhram 2-1.