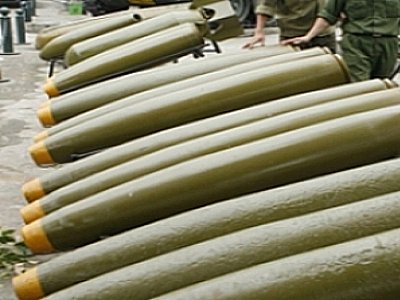 PHUKET: An old mortar shell, which was dropped by the United States Air Force on a village in southern Vietnam during the Vietnam War, exploded on Sunday afternoon, killing four young children and injuring several others, local authorities said.

The incident took place at around noon, local time, on Sunday when a group of young children was playing near bamboo trees along a rural road in Hieu Nghia, a commune located in the Vung Liem district of Vinh Long province. It happened as a local man was holding a gathering to mark the death anniversary of a relative.

Police said the man, identified as 49-year-old Nguyen Van Lat, had discovered the old mortar shell in 2007 while dredging a canal near his house. But instead of reporting the explosive to authorities, he placed the shell in a bamboo bush and left it there until it was discovered by the children.

Without telling the adults, who were at the house, the children picked up the shell, causing it to explode. The powerful blast killed four children, three of them boys between the ages of 6 and 11 and one 4-year-old girl. Four other people, including two men in their 40s and two boys aged 12 and 4, were injured and rushed to area hospitals.

Since the Vietnam War came to an end in April 1975, unexploded ordinance in Vietnam is believed to have killed more than 42,000 people and injured some 60,000 others. Most of the victims died in the first years after the end of the conflict, but old explosives continue to cause casualties.