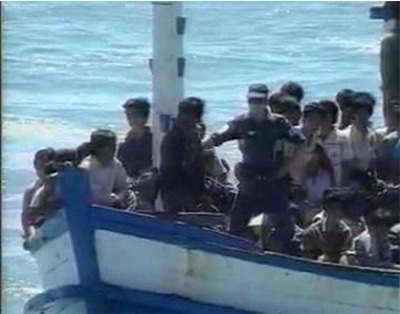 The news comes as the Australian government is nearing an agreement to transfer asylum seekers to Nauru and Papua New Guinea, where they could spend years before being resettled. The practice of offshore processing was abandoned by the Labor party in 2007, but the Australian government hopes it will make asylum seekers think twice about coming to Australia.

“The sooner we’re able to implement this, the sooner we can stop people risking their lives and coming to Australia by boat,” Clare said. “If we can pass legislation through the Parliament this week, we can take action with the support of Australian authorities to set up facilities in Nauru and in Manus as quickly as possible.”

So far this year, the Australian Navy has intercepted 6,281 irregular maritime arrivals (IMAs), most of them coming from Afghanistan and Iran who use Indonesia as a transit region. As of March 31, a total of 4,197 people are being held in immigration facilities while 1,712 people have been approved for a residence determination to live in the community.

Australia’s Migration Act 1958 currently requires people who are not Australian citizens and who are unlawfully in Australia to be detained. This law has been heavily criticized by the United Nations and human rights organizations as many asylum seekers are in detention for months. In 2010, a total of 4,612 irregular maritime arrivals were intercepted by the Australian Navy.

However, the boat journeys made by asylum seekers are not without risk, as demonstrated by the latest incident. In December 2010, at least 30 people were killed when a boat carrying more than 90 asylum seekers sank off the coast of Christmas Island. Forty-two people were rescued, while an unknown number of people remain missing.