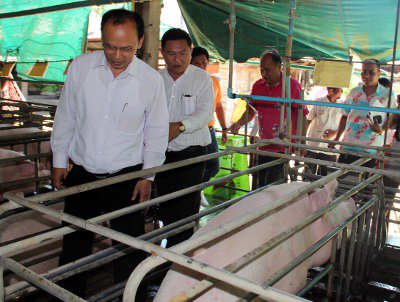 PHUKET: An inspection of a chicken and pig farm led by Phuket Vice Governor Somkiet Sangkaosuttirak has resulted in several recommendations for the farm owners to follow, but otherwise found nothing untoward other than the foul odor emanating from the site.

The inspection follows residents at the The Valley 2 housing estate filing a group complaint with the Damrongtham Center (Ombudsman’s Office) at Provincial Hall about the stench from the farm and allegations that the farm’s operations were contaminating local waterways.

Accompanied by the farm’s animal caretaker, Joompol Rookkarungsri, the inspection team were shown around the facility, which included tours of the pig breeding section, chicken farm, animal slurry and bio-gas processing plant.

After the inspection, the visiting officials retired to the cleaner environment of Srisoonthorn Municipality offices to discuss the findings.

At the meeting, Yuwathida Waewwannajit, who is the marketing director of The Valley 2 housing estate, said, “I filed a complaint to the Damrongtham Center because my house is close to the farm and the smell is very bad.

“I want to see this issue resolved as every day I can smell animal waste,” she added.

V/Gov Somkiet replied, “It is true that the farm has a particular smell. I think the unpleasant smell comes from the animal stool storage facility and there are several things that need rectifying to get rid of the smell.”

He called on the Provincial Health Office to check local water sources for contaminants and for the Provincial Livestock Office to ensure the farm owner is following laws for keeping livestock.

Phuket Provincial Livestock Chief Weerasit Phutthipairote said, “We can make recommendations to help them stay within the law.

“With regard to the smell, we suggest they investigate a better waste management system. Growing trees will also help prevent the smell. Importantly, the farm is actively working to keep the area clean,” he added.

Thaweephan Phuket Farm manager Wutthichai Boonkua, said, “We have been working on animal stool problem. We pulled down the farm that was near the road and closed parts of the chicken farm. There are now only two open-shed farms.

“Once the chickens are no longer laying eggs, those two farms will be decommissioned. Only the pig farm will remain, which will be run according to the Livestock Office regulations,” he said.