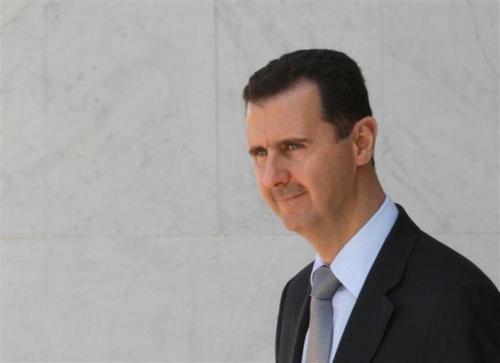 BEIRUT (Reuters): Syrian President Bashar al-Assad will deliver a rare speech today about the uprising against his rule, which has killed 60,000 people and brought civil war to the edge of his capital.

With insurgents fighting their way closer to the seat of his power, state media said in a statement that Assad would speak on Sunday morning about the “latest developments in Syria and the region”, without giving details.

It will be the 47-year-old leader’s first speech in months and his first public comments since he dismissed suggestions that he might go into exile to end the civil war, telling Russian television in November that he would “live and die” in Syria.

Insurgents are venturing ever closer into Damascus after bringing a crescent of suburbs under their control from the city’s eastern outskirts to the southwest.

Assad’s forces blasted rockets into the Jobar neighbourhood near the city centre on Saturday to try to drive out rebel fighters, a day after bombarding rebel-held areas in the eastern suburb of Daraya.

“The shelling began in the early hours of the morning, it has intensified since 11am, and now it has become really heavy. Yesterday it was Daraya and today Jobar is the hottest spot in Damascus,” an activist named Housam said by Skype from the capital.

Since Assad’s last public comments, in November, rebels have strengthened their hold on swathes of territory across northern Syria, launched an offensive in the central province of Hama and endured weeks of bombardment by Assad’s forces trying to dislodge them from the capital’s outer neighbourhoods.

Syria’s political opposition has also won widespread international recognition. But Assad has continued to rely on support from Russia, China and Iran to hold firm and has used his air power to blunt rebel gains on the ground.

With the conflict showing no sign of abating, Syria’s deputy foreign minister visited Iran on Saturday to seek to maintain the support of Assad’s main ally in the region.

Despite the estimated death toll of 60,000 announced by the United Nations earlier this week – a figure sharply higher than that given by activists – the West has shown little appetite for intervening against Assad in the way that NATO forces supported rebels who overthrew Libya’s Muammar Gaddafi in 2011.

But NATO is sending U.S. and European Patriot surface-to-air missile batteries to the Turkish-Syrian border.

The United States military said U.S. troops and equipment had begun arriving in Turkey on Friday for the deployment. Germany and the Netherlands are also sending Patriot batteries, which will take weeks to deploy fully.

Turkey and NATO say the missiles are a safeguard to protect southern Turkey from possible Syrian missile strikes. Syria and allies Russia and Iran say the deployments could spark an eventual military action by the Western alliance.

Syria’s war has proved the longest and bloodiest of the conflicts that arose out of popular uprisings in Arab countries over the past two years and led to the downfall of autocratic regimes in Tunisia, Egypt, Libya and Yemen.

The war pits rebels mainly drawn from the Sunni Muslim majority against Assad, a member of the Shi’ite-derived Alawite minority sect, whose family has ruled Syria since his father seized power in a coup in 1970.

Syria’s SANA state news agency said a journalist, Suheil al-Ali from the pro-government Addouniya TV, had died of wounds sustained in an attack by terrorists, the term government media use to refer to rebels. Syria was by far the most dangerous country for journalists last year, with 28 killed.

The opposition-linked Syrian Observatory for Human Rights, which monitors the conflict from Britain through a network of activists on the ground, reported fighting and shelling on Saturday in the eastern Euphrates River town of Deir al-Zor and near the central city of Hama, as well as near Damascus.

Assad’s last formal speech was delivered to parliament seven months ago, in early June. “If we work together,” he said, “I confirm that the end to this situation is near.”

World News: Armstrong may be on verge of admitting drug use